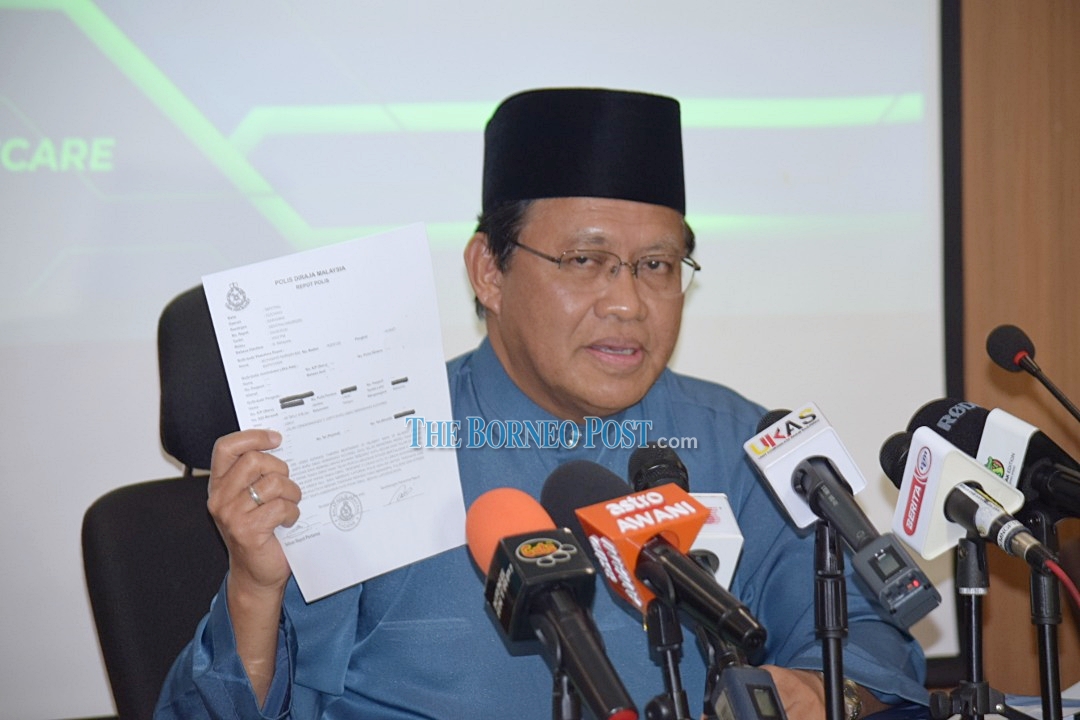 Dr Abdul Rahman holds up the police report made on the matter during a special press conference held at DBKU library at Majma Mall, Jalan P Ramlee here.

Assistant Minister in the Chief Minister’s Department (Islamic Affairs and DBKU) Datuk Dr Abdul Rahman Junaidi said a police report regarding the incident had been lodged at the central police station at about 3pm on Thursday and a statement was also recorded at Kuching district police headquarters.

“We will let the police complete their investigation and inform us of their findings before we take the next course of action,” he said during a special press conference held at DBKU’s library at Majma Mall, Jalan P. Ramlee here today to explain the city hall’s stand on the matter.

Dr Abdul Rahman pointed out that the actions of the group of individuals who affixed Chinese characters on road signs of Wayang Street, Jalan Main Bazaar and Jalan Greenhill, which had gone viral on social media, had contravened section 103(3) of the Local Authorities Ordinance 1996 and By-law 22, Local Authorities (Cleanliness) By-law, 1999.

A press statement by DBKU’s director Dr Moshidi Ahmad had also stated that such actions were being investigated under Section 427 of the Penal Code (Act 527).

“DBKU was informed by members of the public of a group of red-shirt youths sticking Chinese characters on road signs without permission. Such actions could be classified as vandalism in areas under DBKU,” said Dr Abdul Rahman, adding the city hall had in fact inspected the road signs mentioned and found it to be true.

Dr Abdul Rahman remarked that the actions of affixing Chinese characters on road signs without permission from the city hall had not only disrespected the existing laws in place and the local authorities, but it was also as if those involved were “challenging” DBKU to take action against them under existing laws.

Based on the information from Morshidi, the assistant minister said the political party did not approach the city hall for any discussions or meetings on the matter.

“DBKU advises the individuals involved to take down the Chinese characters stickers immediately and make a public apology,” said Dr Abdul Rahman, stressing that he hoped such provocative action which could “threaten racial harmony” would not be repeated again.

He added that he would discuss with DBKU Datuk Bandar Datu Junaidi Reduan and Morshidi on whether to instruct their enforcement personnel to remove the stickers once the investigation is completed.

He explained that other parties might want to have the language of their mother tongue written on road signs if other languages like Chinese were used, aside from the national language.

Dr Abdul Rahman went on to say that there were many languages used in the state, such as the Iban and Bidayuh languages as well as Jawi writing.

Moreover, he stressed that Bahasa Malaysia was the national language as enshrined in the federal constitution and it was of the view that only one language, Bahasa Malaysia, should be used for road signs under DBKU’s jurisdiction.

“Under the management of DBKU, the city hall has always maintained an open mindset to suggestions from the public in all areas but I hope people would respect the city hall’s decisions as they have the final say,” said Dr Abdul Rahman.

Meanwhile, DAP Sarawak chairman Chong Chieng Jen said they will give their full cooperation in accordance to the law of the council and any other relevant authorities and Dapsy was prepared to face the consequences of their actions.

Chong also said they were ready to cooperate with DBKU to resolve the controversial road sign issue.