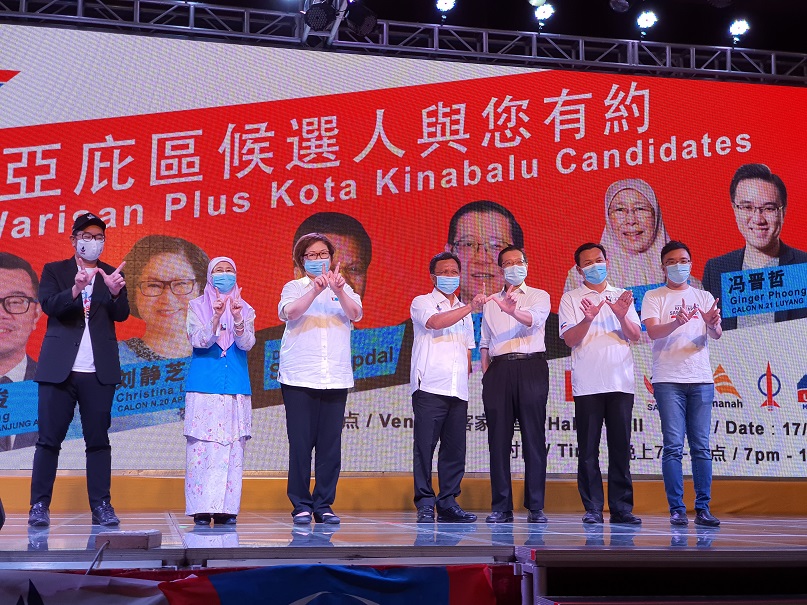 Shafie (centre) and others forming the Warisan logo with their hands. From left: Wong, Dr Wan Azizah, Liew, Lim, Tan and Phoong.

KOTA KINABALU: “We are here to build a nation, not a particular race or religion” – a quotable quote from caretaker Chief Minister Datuk Seri Mohd Shafie Apdal which now appears on billboards across the city.

At the ‘Date with Warisan Plus Kota Kinabalu candidates’ gathering attended by 1,000 people at the Sabah Hakka Hall on Thursday night, he elaborated on his quote, to applause from the appreciative audience.

Shafie, who is President of Parti Warisan Sabah, drew attention to racial strife and religious conflict in some parts of the world, saying such phenomena have destroyed nations.

“When we took over the government in May 2018, we didn’t build tall buildings but tried to inculcate good values in the Malaysian way of life in Sabah.

Shafie, meanwhile, commended Liew for her proactive role as Minister of Tourism, Culture and Environment as reflected in the surge of tourist arrivals to Sabah (international and domestic) in 2019 compared with the previous year.

“Vote in the right government for the future of Sabah. Please vote for Christina, make sure she wins in Api Api,” he said to applause.

In his speech, DAP Secretary-General Lim Guan Eng recalled how attempts were made by certain quarters to bar him from entering Sabah recently.

“Datuk Seri Shafie did not stop me. Only the Chief Minister and the State have power over immigration matters. Any interference in Sabah’s rights goes to show that they have no respect for the CM’s power (under the 20-Point Agreement),” he pointed out.

The former Penang Chief Minister stressed that Sabah needs Shafie as Chief Minister as he is a statesman who is brave enough to defend the State’s rights.

“Datuk Seri Shafie deserves support for his vision of building a nation and not a particular race or religion. I saw this message (which touches the hearts of all Malaysians) on a billboard as I was coming to this event (Date with Warisan Plus KK Candidates). We want a government that preaches unity for the people. September 26 is the day for Sabah’s destiny where the people must stand up for the right against the wrong.

“Vote for (Datuk Seri) Shafie and Warisan Plus to ensure a big win for the sake of Sabah and its future generation. This is an election we cannot afford to lose because we have too much at stake. The people of Malaysia are looking up to the people of Sabah to show the way,” he said.

“September 26 is our chance for Sabah to lead the way to show them (political opponents), teach them about integrity, justice and substance.

“What are important things in life are the human values you hold, the truth and substance you are, full of integrity and dignity,” she said, adding that the people are able to differentiate diamond from glass.

Earlier, incumbent Api Api Assemblywoman Datuk Christina Liew, who is defending her seat, reminded the electorate of the saying “United We  Stand, Divided We Fall”.

“Unity is strength and when we are united, we become stronger. Unity leads to stability. Unity is the cornerstone of a strong and politically stable nation. Only with political stability will we be able to attract investors to our country to be our partners in development.

“It is important that we stay united to vote Warisan Plus decisively for a strong and stable government,” she asserted.

Liew said Pakatan Harapan Sabah (PKR, DAP and  Amanah) is fully committed to Warisan Plus and stands solidly behind Shafie as their candidate for Chief Minister when they form the new government come September 26.