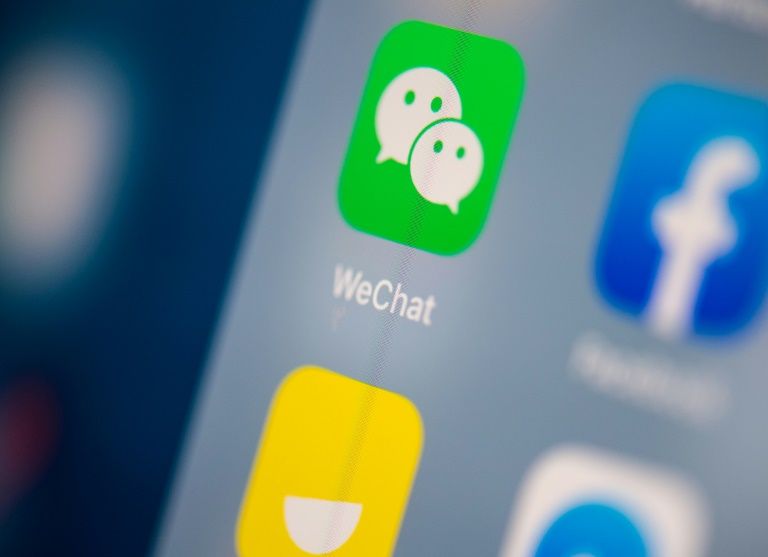 WeChat, the Chinese super-app used for messaging, shopping, payments and other services, is set to be banned in the United States, which claims it poses a national security threat. AFP Photo

The United States on Friday ordered a ban on downloads of popular the video app TikTok and effectively block the use of the Chinese super-app WeChat on US national security grounds, escalating a fight with Beijing over digital technology.

The measures effectively disable the Tencent-owned WeChat app in the United States from Sunday, but are expected to allow TikTok users who have already downloaded the app to keep accessing the service through November 12.

That timeframe potentially allows for a tie-up between TikTok, owned by China’s ByteDance, and a US company ordered by the Trump administration to safeguard data for the popular entertainment app.

US officials described Friday’s measures as essential to national security as President Donald Trump confronts Beijing on a number of fronts amid a tough re-election campaign.

“The Chinese Communist Party has demonstrated the means and motives to use these apps to threaten the national security, foreign policy, and the economy of the US,” Commerce Secretary Wilbur Ross said in a statement.

TikTok denounced the order and said it would continue to fight the Trump administration’s crackdown.

“We disagree with the decision from the Commerce Department,” the company said Friday, adding that it was “disappointed” in a ban on new downloads that takes effect on Sunday, saying it impedes a tool “for entertainment, self-expression and connection.”

– Service will be ‘degraded’ –

The moves would effectively disable US use of WeChat — a so-called super-app used for messaging, shopping, payments and other services — and TikTok from the online marketplaces operated by Apple and Google.

After Sunday, services on WeChat will be “degraded” because of restrictions on US digital services that support the app, said a senior Commerce Department official.

The official said users who already have WeChat installed may still have some capability, but that it “may not be particularly functional after Sunday.”

Owned by China-based tech giant Tencent, WeChat is widely used among Chinese expats to keep in touch with people back home.

The ban on WeChat will disrupt the application in the US, but does not affect its service in China where the app is much more widely used.

As for TikTok, existing users will be able to continue using the app until November 12 — when it would also face a full ban on its US operations if no deal is reached.

TikTok’s brand of brief, quirky phone videos has become hugely popular, especially among young people, with 100 million users in the US alone — and its use has further soared among teens stuck at home through the coronavirus pandemic.

Ross told Fox News that TikTok users will not have access to improved apps, updated apps, upgraded apps, or maintenance as of Sunday.

“If there’s not a deal by November 12 under the provisions of the old order, then TikTok… would be, for all practical purposes, shut down,” Ross added.

– Pressure grows for a deal –

The clampdown follows through on a threat by President Donald Trump, who has claimed Chinese tech operations may be used for spying.

It also ramps up the pressure on ByteDance to conclude a deal to sell all or part of TikTok to allay US security concerns.

A deal which appeared to be taking shape would allow Silicon Valley giant Oracle to become the tech partner for TikTok, but some US lawmakers have objected to allowing ByteDance to keep a stake.

The TikTok saga has seen several twists as the US gears up for the November 3 presidential election, with Microsoft seen initially as the suitor before its bid was rejected.

Trump is searching for a breakthrough with voters as polls show him facing an uphill battle to win a second term.

He has increasingly put national security and his aggressive stance towards China at the center of his campaign strategy, regularly accusing Democratic opponent Joe Biden of weakness towards Beijing.

Trump tweeted late Thursday that Biden had “cheered the rise of China as a ‘positive development’ for America and the world.” — AFP