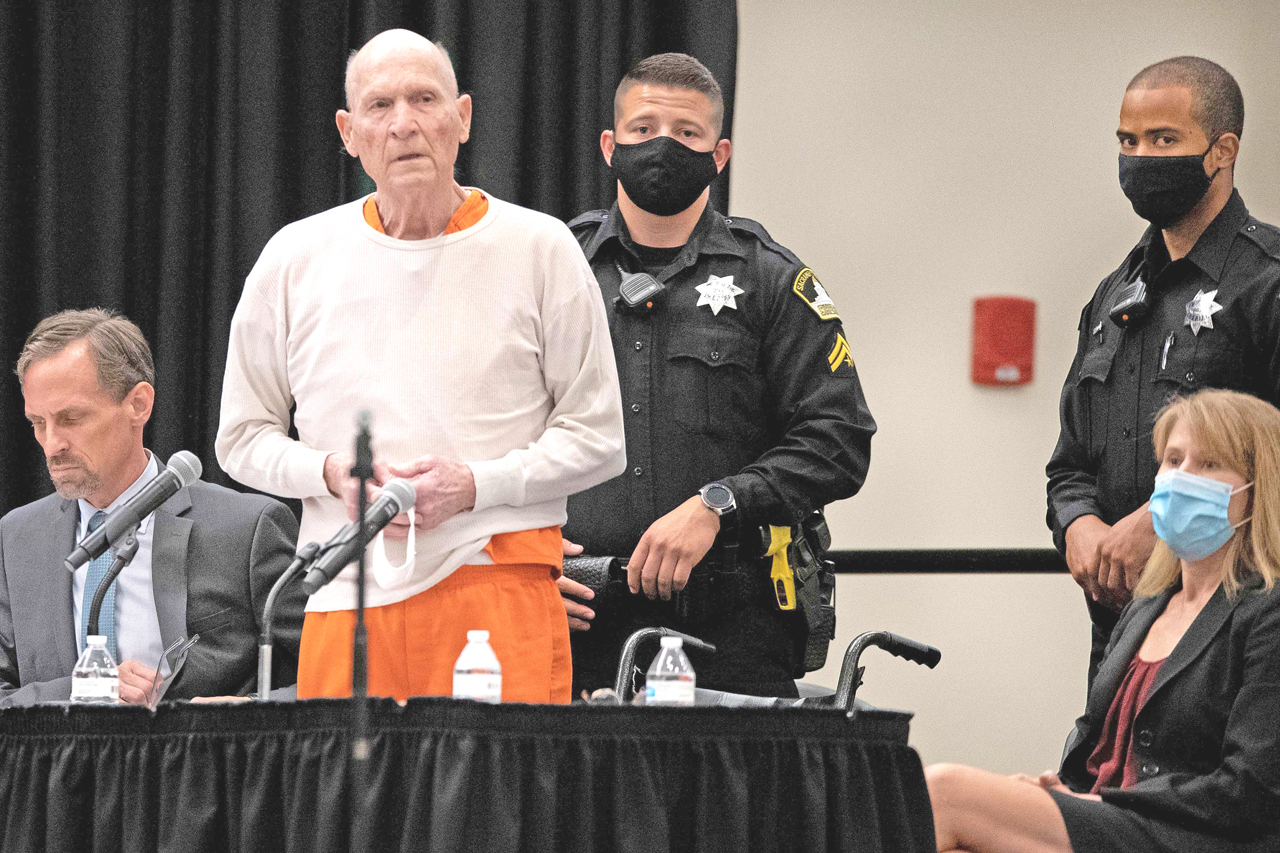 SACRAMENTO: A US former policeman dubbed the “Golden State Killer” was sentenced to life in prison without the possibility of parole Friday, as he finally apologised to his victims for a brutal decade-long crime spree that terrorised California.

Joseph James DeAngelo Jr – who had already confessed to 13 murders and dozens of rapes in the 1970s and 1980s under a deal to avoid the death penalty – sat impassively behind a face mask in the Sacramento courtroom as his sadistic crimes were listed.

“The survivors have spoken clearly. The defendant deserves no mercy,” said Judge Michael Bowman, to thunderous applause from victims and their families.

He handed down the “absolute maximum sentence the court is able to impose under the law.”

Moments before he was sentenced, DeAngelo stood and apologised to those present in the converted university auditorium, filled to capacity under social distancing measures.

“I’ve listened to all of your statements. Each one of them. And I’m truly sorry to everyone I’ve hurt,” said DeAngelo, to stony silence.

DeAngelo, 74, was ordered to serve 11 consecutive life terms without parole for 13 first-degree murders. The first three murders took place before a 1979 legal change, and those sentences are served concurrently.

The killer, who was retired and has three adult daughters and grandchildren, was not arrested until 2018, three decades after the “Golden State Killer” had last struck.

The manhunt finally ended after investigators successfully matched DNA from crime scenes with a family genealogy database used by his relatives.

“Relieved – very relieved that he is going to spend the rest of his life in jail,” victim Jane Carson-Sandler told AFP.

DeAngelo’s known attacks began in 1975, initially in the Sacramento area of central California, before spreading out across the state.

He repeatedly broke into homes under cover of darkness to rape women and girls, and murdered many victims in their beds.

In one of countless unspeakable acts, DeAngelo forced one victim to orally pleasure him by threatening to cut off the ear of her baby boy.

DeAngelo’s spree apparently ended abruptly in 1986 with the rape and murder of an 18-year-old girl.

Along the way, the meticulous masked assailant was given a number of other nicknames including the East Area Rapist, the Diamond-Knot Killer and the Original Nightstalker.

Prosecutor Todd Spitzer said he wished DeAngelo had received the death penalty, but had agreed to the deal so that victims and families could avoid a lengthy trial and see justice served in their lifetimes.

“Instead of (you) just staring straight forward in some glazed-over eyes, I wanted to stare at you, watch you silently slip into the night,” he told DeAngelo.

His sentencing followed three days of emotional testimonies from victims and family members, who described the devastating impact DeAngelo’s crimes had wrought on their lives.

Patricia Murphy, who was 29 and a mother of two when DeAngelo repeatedly raped her in 1976, called DeAngelo “an evil monster with no soul.”

“May you rot in prison,” said her daughter Patti Cosper, who raised her middle finger, pointing it at DeAngelo, as she read out her mother’s statement.

Moments before he was sentenced, DeAngelo’s lawyers attempted to paint a picture of their client as a family man.

A statement read out from DeAngelo’s sister blamed their father “in part” for “mental and physical abuse,” but insisted she was not “searching for an excuse for it all.”

A frail-looking DeAngelo was wheeled into the room Friday wearing an off-white sweatshirt over his orange prison jumpsuit.

But prosecutors showed journalists recent video footage of DeAngelo walking easily around his prison cell, accusing him of faking feeble health for sympathy.

“I don’t believe any of that – I don’t think there is any truth” to DeAngelo’s courtroom apology, said Carson-Sandler.

“It was all BS,” said Spitzer.

DeAngelo also admitted 13 kidnapping charges, for which he was ordered to serve an additional life sentence. He was also sentenced to eight years on weapons charges.

Prosecutor Diana Becton called DeAngelo “the boogeyman” whose “horrific, unspeakable crimes” inflicted “hours of terror that can never be erased or forgotten.”

“After today’s sentencing Mr DeAngelo will never threaten our victims again,” she added.

“He will never harm another soul.” — AFP