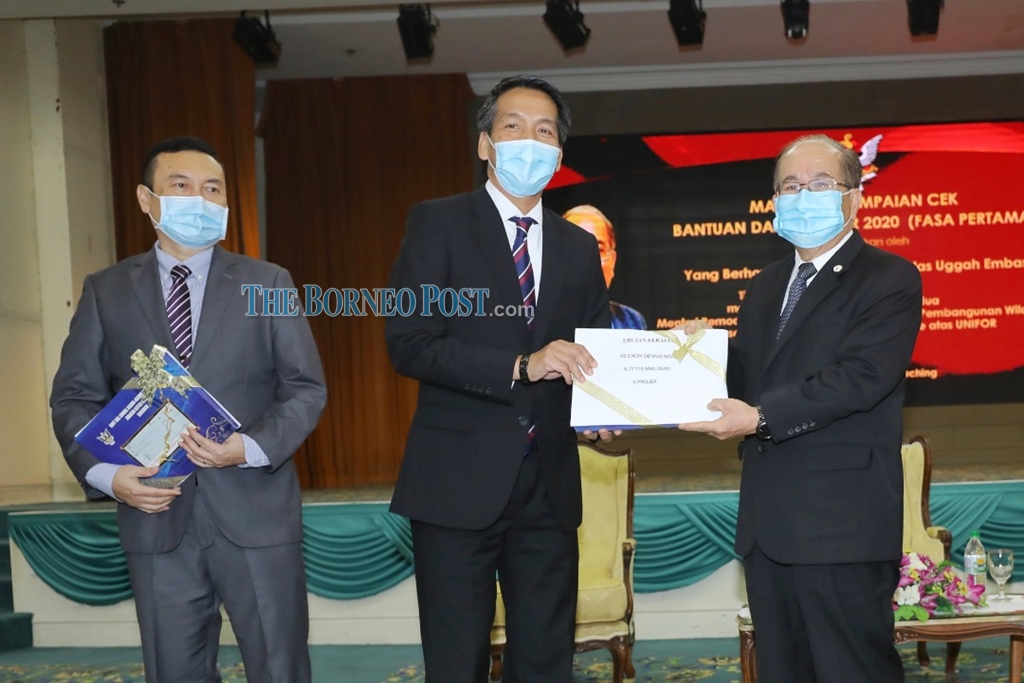 Telang Usan assemblyman Denis Ngau (centre) receiving some RM800,000 from Uggah on behalf of churches and temples in his constituency as Unifor director Richard Lon looks on. – Photo by Chimon Upon

KUCHING (Sept 2): The Sarawak government through the Unit for Other Religions (Unifor) has today presented RM38.747 million to 298 non-Islamic religious bodies from all over Sarawak for the repair and renovation of places of worship.

Deputy Chief Minister Datuk Amar Douglas Uggah Embas, who is in-charge of the unit, said the amount was part of the RM50 million allocation approved by the state government for this year.

He said that the handing over of the funds to the religious bodies was delayed due to the Covid-19 pandemic.

“This is the first round for the presentation of the funds for this year, due to the pandemic. After this we have RM12 million balance to be given out to approved applications within a month,” he said after handing out the funds here this afternoon.

The funds were received by 52 assemblymen on behalf of the various houses of worship in their constituencies.

Uggah in his speech earlier thanked the state government for its generosity with Unifor since its formation.

He said the government had allocated RM15 million to the unit to build, repair and renovate non-Islamic houses of worship in 2017, followed by RM20 million in 2018 and RM30 million last year.

“With this generous allocation from the state government, we hope all projects can be completed according to schedule, especially those that have been delayed due to shortage of funds,” he said.

Uggah said Unifor officers would be going down to the ground to monitor the progress of these projects to ensure that they are completed on time and within budget.

“In this matter, we ask all elected representatives to assist Unifor because one of the issues we are facing is when one of the religious bodies actually needed RM1 million for their building fund but they requested RM3 million and you endorsed it. Upon investigation, we found it was not true,” he said.

Another issue, Uggah said was the size of the congregation of some of places of worship which might not be accurate.