KUALA LUMPUR, Sept 26 — The MCMC has issued a final warning letter to TM over its misleading upload speed for its Unifi 500Mbps plan.

It warns TM to adhere to Section 1.2 of the General Consumer Code (GCC) which requires service providers to provide information that’s sufficient, accurate, true, up-to-date and in a simple and straight-forward language.

As mentioned by the MCMC earlier, they have found several elements that infringe the rights of consumers when the upload speed of the 500Mbps Unifi fibre plan was quietly changed from 200Mbps to 100Mbps.

The new plans were revealed on the 24th of August 2020 and TM insists that the 200Mbps upload speed was a “mistake“. TM has made the necessary changes to their Unifi portal, FAQ and leaftlet on the 2nd September 2020.

The commission had told TM to make necessary corrections for the 500Mbps plan on all channels and to reach out directly to affected customers.

They also urge TM to conduct their business ethically by ensuring all advertising and promotional materials are accurate.

TM is also reminded to ensure all of their customers enjoy quality services as advertised and to inform them of any issues that may affect their experience.

The commission will ensure that the rights of consumers affected by the misleading advertised upload speed will be handled fairly by TM.

Failure to do so, will result further action under Section 242 of the Communications and Multimedia Act (CMA) 1998 which carries a penalty of not more than RM100,000 or jail sentence of not more than 2 years, or both.

The MCMC has expressed strong concerns over weak internal controls within TM which resulted the confusion of its Unifi fibre broadband plans.

They hope that this incident will serve as a reminder to all service providers to ensure the importance of upholding consumer rights in their business practices.

TM has announced earlier this week that affected new Unifi 500Mbps subscribers are able to terminate without penalty under its 30-day “Try me” campaign.

Meanwhile, existing Unifi customers that have recently switched to the 500Mbps plan will be allowed to revert to their original plan with no extra charge. — SoyaCincau 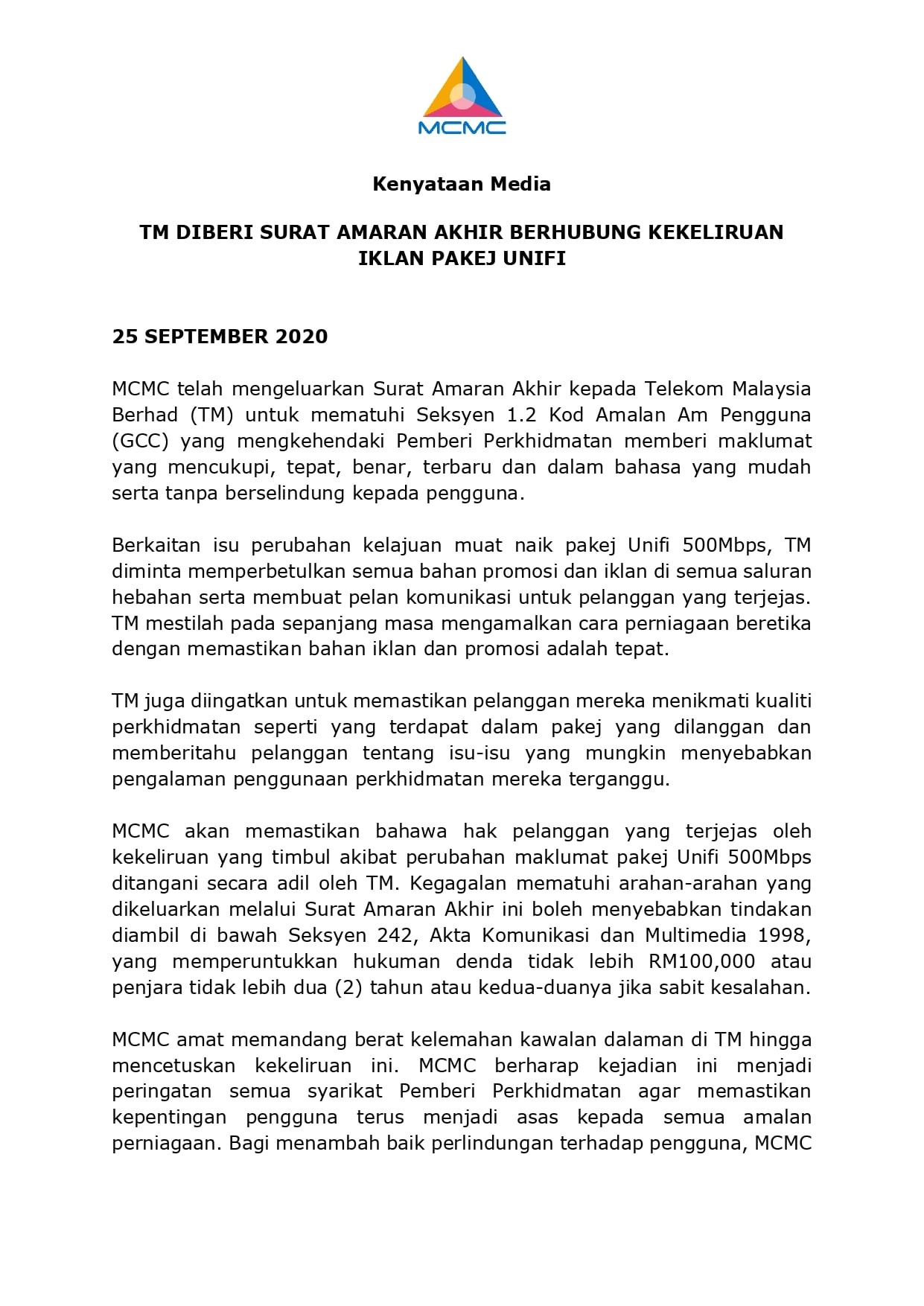