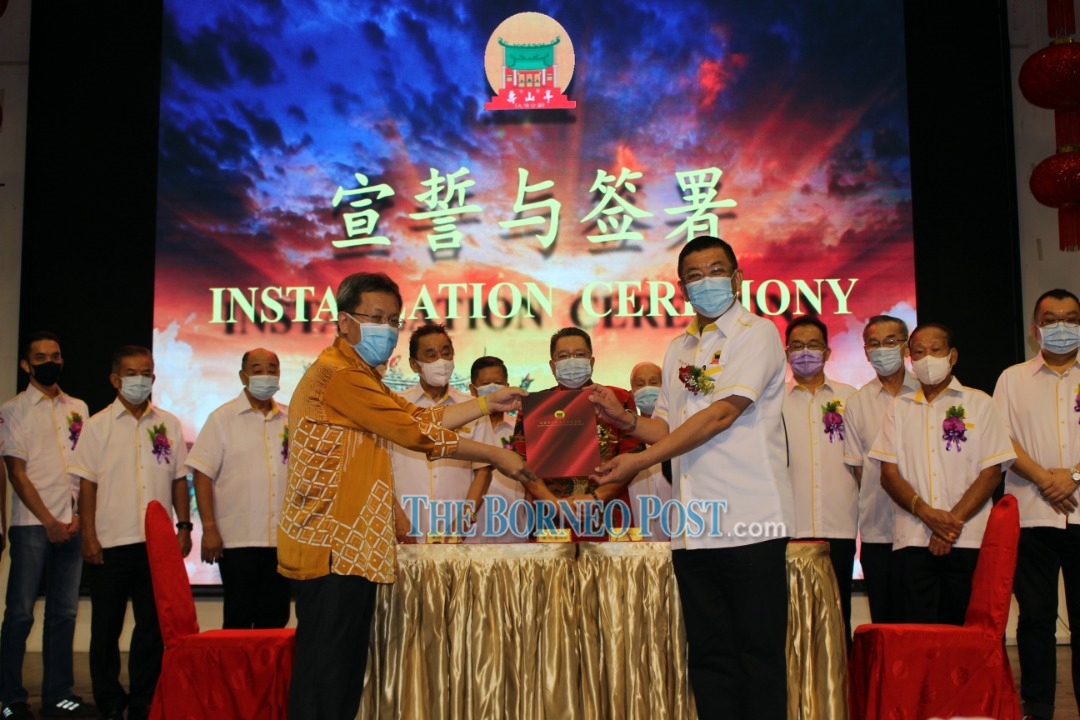 Dr Sim (left) poses for a photo with Richard Wee (right) after signing of a book containing the list of the new office-bearers as a witness during the installation ceremony, while Hong Seng (back, centre) and others look on.

KUCHING (Sept 20): An umbrella body will be set up to better manage all the Chinese temples in Sarawak and facilitate cooperation with Unit for Other Religions (Unifor), said Kuching Chinese Community Charitable Trust chairman Dato Richard Wee.

“During a recent discussion with Unifor, I was told other main religious groups have their own committee or association to facilitate their activities and only the Chinese temples in the state do not have such a body yet to represent them,” said Wee during a new committee installation ceremony of Kuching Chinese Community Charitable Trust last night.

Wee said the lack of a proper umbrella body to represent the Chinese temples in the state had created difficulties to the state government in terms of allocation of funds to the houses of worship.

“As a result, Unifor suggested that all Chinese temples come together in forming an umbrella body to act as a communication channel with Unifor and allowing the unit to provide assistance to the development of Chinese temples,” he added.

Meanwhile, Unifor director Richard Lon told the crowd that an umbrella body to represent all the Chinese temples in the state could assist the state government in dissemination of important information via a single platform, such as the standard operating procedure for the recent Hungry Ghost Festival.

“As for the Kuching Chinese Community Charitable Trust, I also hope you will provide a feedback to Unifor for us to provide a better service and assistance to the people. The same applies to Chinese temples to work closely with us,” said Richard.

He also called the religious associations in the state to continue to give their support to the state government in championing for an inclusive society and to bring the objectives of Unifor to a higher level.

Minister of Local Government and Housing Dato Sri Dr Sim Kui Hian, who was present at the ceremony, pointed out the unity and harmonious relationship between people of different races and background were the key ingredients for the state to prosper and advance in the future.

Unlike Peninsular Malaysia where divisive and controversial statements were made by certain parties, Dr Sim said the Gabungan Parti Sarawak (GPS) state government was committed in looking after the welfare of the people, irrespective of religion, adding that any extremist views were outright rejected in the state.

“For the sake of the state’s future, the people need to be united and I believe the golden era of Sarawak will start in 2023, with the state’s revenue expected to hit RM12 billion by then,” said Dr Sim.