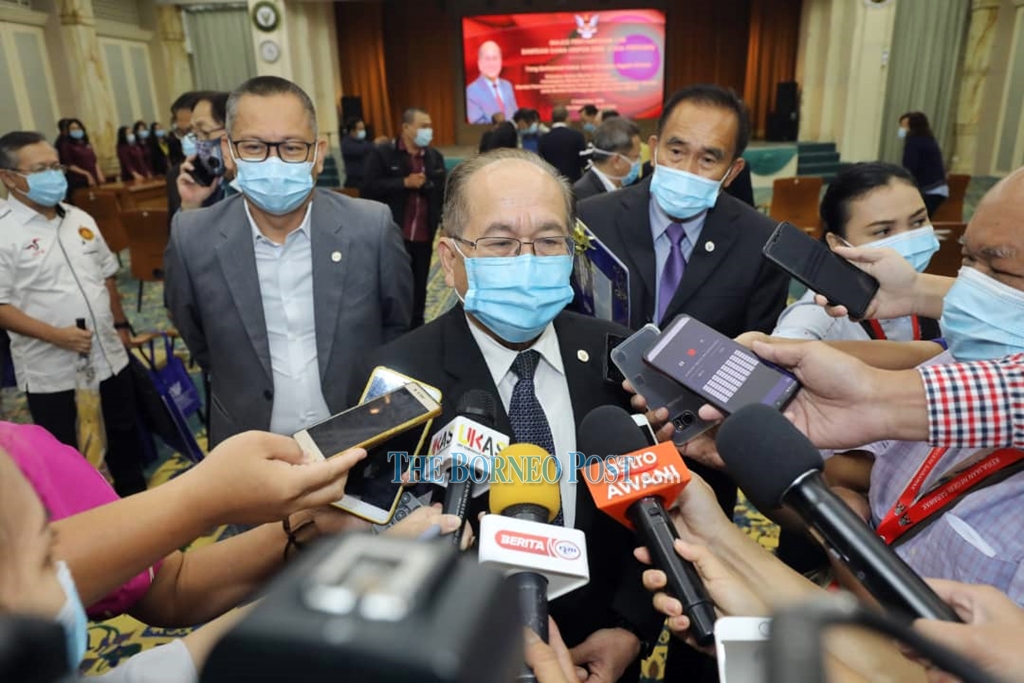 Uggah speaking to reporters after an event at Wisma Bapa Malaysia. – Photo by Chimon Upon

KUCHING (Sept 2): Sarawak will enforce the ban on the entry of foreigners from India, Indonesia and the Philippines into the state from Sept 7 in line with the federal government’s decision, said Deputy Chief Minister Datuk Amar Douglas Uggah Embas.

“Kuala Lumpur (federal government) has decided not to allow Indonesian, Filipino and Indian nationals to enter the country. We (Sarawak) are part of Malaysia, so we will follow.

“This is because their entry (Indonesian, Filipino and Indian nationals) to Sarawak is through Kuala Lumpur. If it is not allowed there, then likewise for us,” he told reporters when met after officiating the State Government Assistance Fund Handover Ceremony through the Unit for Other Religions (Unifor) to 298 representatives of other religious bodies at Wisma Bapa Malaysia here today.

He was asked to comment on the federal government’s decision to restrict the entry of long-term pass holders from India, Indonesia and the Philippines with effect from Sept 7.

Uggah, who is also State Disaster Management Committee (SDMC) chairman, said the new policy taken by the federal government was a wise decision as the number of Covid-19 import cases in the country involving Indonesians, Filipinos and Indians were quite high.

“The incidence of Covid-19 in these three countries is also very high, with the Philippines among the countries recording the highest Covid-19 cases in this region followed by Indonesia.

“India is ranked sixth or seventh in recording the highest number of Covid-19 cases in the world,” he said.

Senior Minister (Security Cluster) Datuk Seri Ismail Sabri Yaakob yesterday said the country will block the entry of long-term pass holders from India, Indonesia and the Philippines starting from Sept 7 due to the sharp increase in positive Covid-19 cases in those countries.

Also blocked were couples to Malaysian citizens and their children as well as students from the three countries who wanted to return to Malaysia.