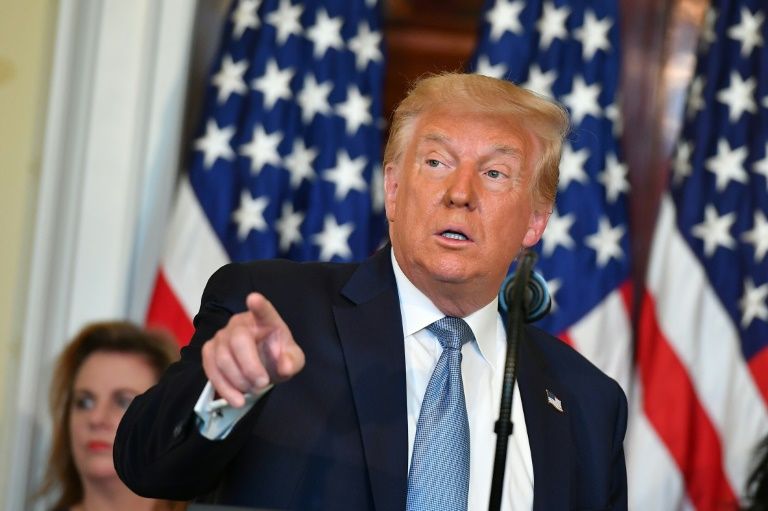 US President Donald Trump lashed out at former first lady Michelle Obama after she delivered a scathing takedown of his leadership. AFP Photo

US President Donald Trump lashed out at former first lady Michelle Obama on Tuesday after she delivered a scathing takedown of his leadership on the opening night of the Democratic convention.

“I thought it was a very divisive speech, extremely divisive,” Trump told reporters at the White House.

“Frankly, I would not even be here if it wasn’t for Barack Obama,” he said. “I would be building buildings someplace and having a good time.”

In her pre-taped remarks to the convention — which has gone almost entirely online because of the coronavirus pandemic — Michelle Obama urged Americans to rally behind Democrat Joe Biden, her husband Barack Obama’s former vice president, in November’s presidential election.

Biden “will tell the truth, and trust science,” she said in a jab at Trump, who has been accused of ignoring the advice of scientists on how to respond to a health crisis which has left some 170,000 Americans dead and millions without jobs.

In unprecedented criticism of a sitting US president by a former first lady, she painted Trump as a man who lacks the competence, character and decency for the job.

“Whenever we look to this White House for some leadership, or consolation, or any semblance of steadiness, what we get instead is chaos, division and a total and utter lack of empathy,” she said.

“Donald Trump is the wrong president for our country,” she said. “He has had more than enough time to prove that he can do the job, but he is clearly in over his head.

“He cannot meet this moment.”

After a night of hard-hitting attacks on Trump from Michelle Obama, Vermont Senator Bernie Sanders and others, including several Republicans, the convention is to feature remarks on Tuesday by two former presidents — Jimmy Carter and Bill Clinton.

Jill Biden, the candidate’s wife, is also scheduled to speak along with New York Representative Alexandria Ocasio-Cortez, a rising star in the progressive wing of the party.

The convention is to culminate on Thursday when the 77-year-old Biden will formally accept the Democratic nomination and deliver his acceptance speech.

US presidential nominating conventions are traditionally raucous events featuring rousing speeches, balloons and confetti and thousands of delegates from around the country.

But the Democratic convention in Milwaukee, Wisconsin, and next week’s Republican event in North Carolina have been forced to go almost entirely online because of the COVID-19 outbreak.

Larry Saboto, a professor of politics at the University of Virginia, gave the Democrats’ virtual convention a thumbs-up after the first day.

“This show, this longest political TV ad ever, isn’t designed for the junkies but for people who dip in for 10 minutes before going back to Netflix,” Sabato said. “And that’s smart.”

Biden is leading Trump in the polls ahead of the November 3 election and the Republican incumbent has been desperately seeking to persuade Americans that the COVID-19 crisis is behind them and that the situation is improving.

“My Administration and I built the greatest economy in history, of any country, turned it off, saved millions of lives, and now am building an even greater economy than it was before,” Trump tweeted on Tuesday.

Trump also continued his attacks on mail-in voting, insisting without proof that it was “going to be a disaster the likes of which our country has never seen.

“It’ll end up being a rigged election or they will never come out with an outcome,” he said. “They’ll have to do it again and nobody wants that. And I don’t want that.”

While Democrats hold their convention, Trump has been visiting battleground states.

He visited Minnesota and Wisconsin on Monday and plans to go to Iowa and Arizona on Tuesday. – AFP