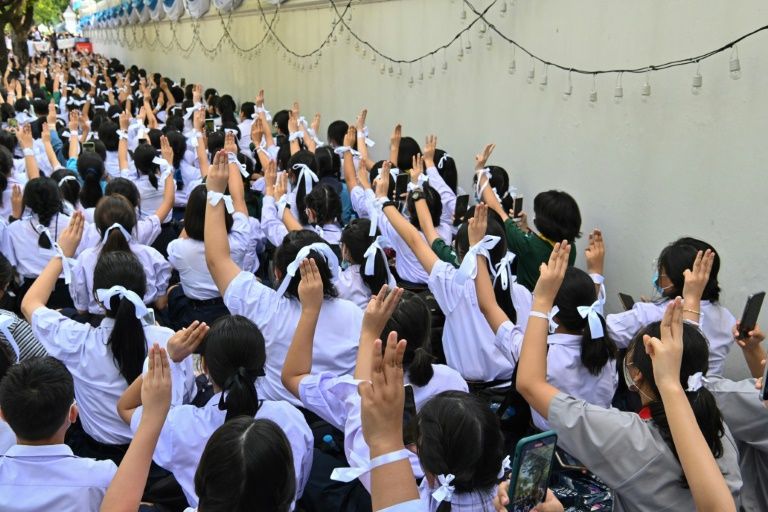 Thai students have taken to displaying white ribbons and flashing three-fingered salutes from the movie “Hunger Games” as a show of support for the democracy movement. AFP Photo

A Thai court issued arrest warrants Wednesday for six pro-democracy activists involved in recent rallies that heard calls for an overhaul of the government and even reforms to the monarchy — a subject usually taboo in the kingdom.

Near-daily demonstrations by a youth-led pro-democracy movement have been largely tolerated by authorities so far, but police said Wednesday they now had warrants to arrest half a dozen of the most prominent protesters.

While the use of punitive lese majeste laws has slowed in recent years, legal observers say the military-aligned government has stepped up other legal mechanisms to target dissent — including using sedition and computer crime legislation.

Two of the warrants issued Wednesday are for protesters previously arrested and bailed — human rights lawyer Anon Numpa and student leader Panupong Jadnok — but they now face fresh charges related to a rally on August 10 at Thammasat University.

Anon was the first activist to openly discuss reforming the monarchy at a Harry Potter-themed rally on August 3.

On Wednesday night he was arrested as he left work for that speech, the Thai Lawyers for Human Rights group said.

The later Thammasat gathering drew some 5,000 people as Anon and Panupong spoke about the monarchy.

Protesters at weeks of rallies have been openly critical of the government of Prime Minister Prayut Chan-O-Cha — a former army chief who seized power in a 2014 coup.

At the Thammasat rally, however, they also demanded greater accounting of palace finances and the abolition of the controversial royal defamation laws which carry a sentence of up to 15 years in prison.

King Maha Vajiralongkorn sits at the apex of Thai power, buttressed by a powerful arch-royalist military and the country’s billionaire clans.

Since he ascended the throne in 2016, the king has made unprecedented changes to the institution — including amassing direct control of the palace’s fortune, which is estimated to be worth up to $60 billion.

So far, none of the pro-democracy activists have been charged with royal defamation, but their demands have angered pro-royalist supporters and spurred several smaller counter-protests.

The movement has spread to the country’s high schools, with pupils tying a white bow in their hair and on backpacks to show solidarity with the pro-democracy cause.

Hundreds of uniformed teenagers protested outside the Education Ministry on Wednesday, chanting “dinosaur” and booing the minister for what critics say is a rigid, antiquated education system.

The hashtag “Finish school and head to the ministry” trended Wednesday on Twitter, followed by #SaveAnon after his arrest.  – AFP