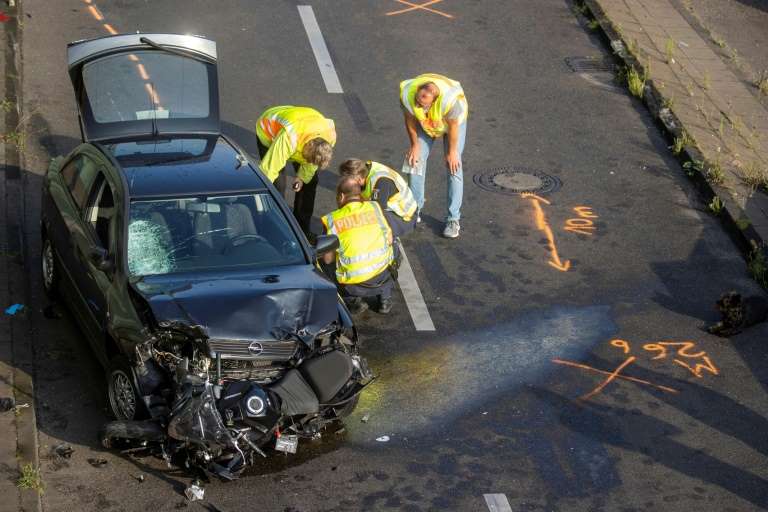 A man has caused a series of motorway accidents in Berlin injuring six people, including three seriously, in what German prosecutors Wednesday described as a suspected Islamist attack.

Police said the man had caused three accidents on a city motorway in the Tempelhof-Schoeneberg district shortly before 7:00 pm (1700 GMT) on Tuesday.

After crashing into a motorbike, he got out of his mangled vehicle and told witnesses a metal box in his car contained a “dangerous object”, which police said turned out to be false.

The suspect, identified only as a 30-year-old Iraqi, had targeted motorcyclists in particular in a “quasi hunt”, a spokesman for the prosecution told a press conference.

Local media reported that he had shouted “Allahu Akbar” (God is greatest) when he emerged from his black Opel Astra.

“The possibility of an Islamist attack cannot be ruled out,” prosecutors said in a statement.

“Statements by the accused suggest a religious Islamist motivation” for his actions. “There are also indications of psychological instability,” they added.

He was arrested on suspicion of attempted murder in at least three cases and is to face a judge who will decide whether he should be placed in a psychiatric facility.

The suspect was already known to police, with prosecutor Margarete Koppers saying he had contact with a known Islamist while staying in the same refugee shelter in 2018-19.

He was also deemed not to be criminally responsible by a court for acts of resistance outside a Berlin shelter last year on account of psychological issues.

He had a prayer rug and a kitchen knife with him at the time of the motorway rampage, Koppers added.

One of those injured in Tuesday’s collisions was a firefighter, said Berlin interior minister Andreas Geisel, adding that he was “dismayed that innocent people have fallen victim to a crime out of nowhere”.

“We must be aware that Berlin remains a focus of Islamist terrorism,” he said.

German media reported that a motorcyclist was also among those hurt.

The suspect had published clues on social media that he was planning an attack, according to the DPA news agency.

He had posted photos of the car used for the attack on Facebook, along with religious slogans, the report said.

His vehicle was brought to a halt after slamming into a motorbike.

“Nobody come any closer or you will all die,” the Bild newspaper quoted the suspect as saying after he got out of his car and placed the metal box on the roof.

However, when police opened the box using high-pressure water jets it was found to contain nothing but tools.

The motorway was closed for several hours, causing significant traffic jams with drivers asked to leave their vehicles as a precaution.

Born in Baghdad, the suspect has a temporary residency permit in Germany until December, according to Koppers.

Investigators have found no links to a terrorist organisation so far, prosecutors said.

People with ties to Islamic extremism have committed several violent attacks in Germany.

The deadliest was a truck rampage at a Berlin Christmas market in December 2016 that killed 12 people.

The Tunisian attacker, a failed asylum seeker, was a supporter of the Islamic State jihadist group.

More recently, an Islamist and his wife were convicted of planning a biological bomb attack in Germany in 2018 with the deadly poison ricin.

The pair had ordered castor seeds, explosives and metal ball bearings on the internet to build the toxic bomb.

The man was sentenced in March to 10 years in prison while his wife received an eight-year sentence in June.

Since 2013, the number of Islamists considered dangerous in Germany has increased fivefold to 680, according to security services.

The far right has often accused Chancellor Angela Merkel of having contributed to the Islamist threat by opening the country’s borders to hundreds of thousands of migrants in 2015. – AFP