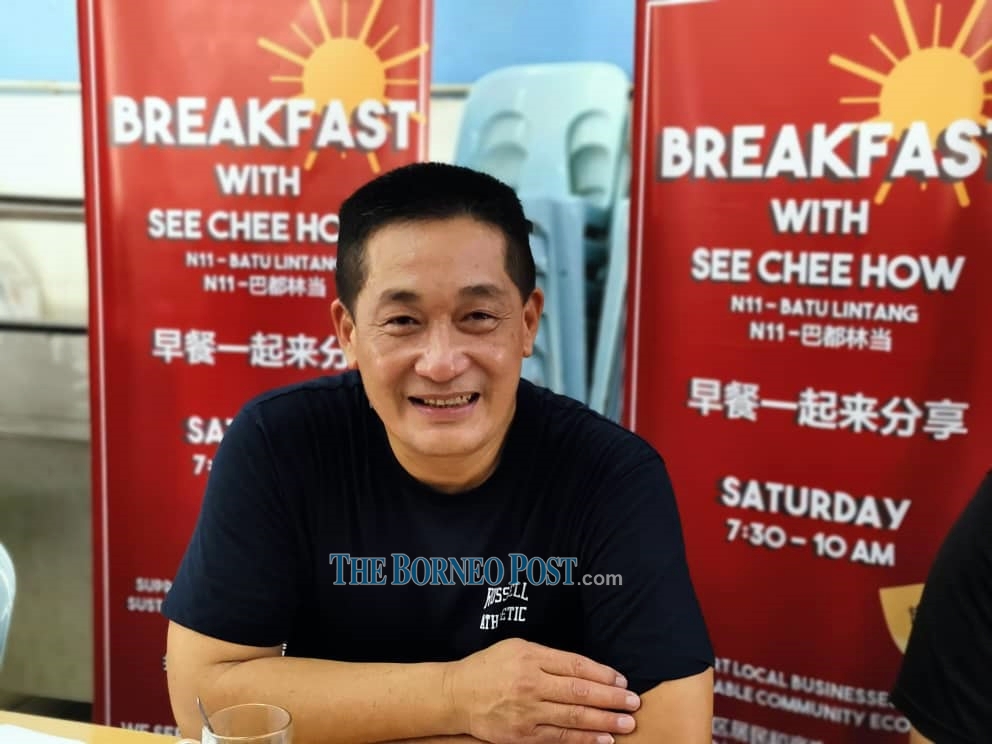 See in a photo call during the press conference.

KUCHING (Sept 26): Batu Lintang assemblyman See Chee How will be seeking re-election on the Parti Sarawak Bersatu (PSB) ticket in the 12th state election, which may be called any time soon.

The former Parti Keadilan Rakyat (PKR) lawmaker said he expected challenges in the next polls, among which was a multi-cornered fight for the urban Chinese-majority seat.

“Yes, (seeking re-election under) PSB. There is no way I can stay at PKR because they sacked me in March and I joined PSB in June,” he told reporters at a coffeeshop in Tabuan Jaya this morning.

See, who will be defending the seat for a third term, said he expected to be challenged by candidates from PKR, Gabungan PartI Sarawak (GPS), Parti Bumi Kenyalang and Gabungan Anak Sarawak among others.

While he was confident that he could win given his track record and past experience working with the constituents, See agreed that some voters might see him contesting as a PSB candidate as an issue when he had initially won the seat on the PKR ticket.

However, he said Batu Lintang is an urban constituency where voters had better access to the latest information including those circulated on social media.

As such, he believed that Batu Lintang voters were aware by now that he was no longer with PKR.

“They should be able to know that I’m now with PSB,” said the two-term assemblyman.

He said he had given it a thorough consideration before joining PSB to carry on with his political struggle.

Pointing out that PSB is a local-based political party, See said PSB would be a force to be reckoned with come the next state election.

“PSB is a local party, a force that can bring about change, to challenge GPS. We have to be more concerned about Sarawak, such as who is more keen to fight for Sarawak’s rights.”

He said PSB is the local-based political party which was putting the rights of Sarawak and Sarawakians first.

See was first elected as Batu Lintang assemblyman in the 2011 state election and then re-elected in the 2016 state polls.