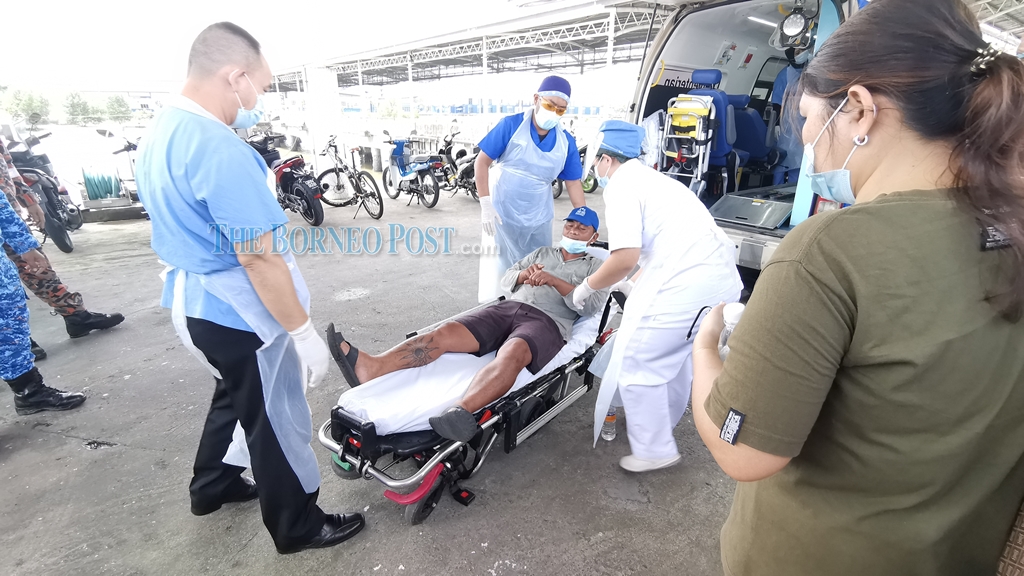 Richard being lifted into an ambulance and taken to the Sarawak General Hospital, after he arrived at the MMEA base in Muara Tebas. – Picture by Roystein Emmor

KUCHING (Sept 17): A search and rescue operation has been launched by the Malaysian Maritime Enforcement Agency (MMEA) Sarawak for four men who are lost at sea after their fishing boat was believed to have capsized off Tanjung Po near Bako yesterday.

The fishermen, identified as Adenan Senawi, 44, Bong Fah Yew, 48, Harly and Ani, whose full name and age are not immediately known, had left for sea at around 3pm on Wednesday.

Richard Chee, 38, a former Navy personnel who was with the group, was rescued at around 9am today near Pulau Burung by a local fisherman after he was found floating inside a fish cooler box.

Sarawak Maritime Director First Maritime Admiral Robert Teh Geok Chuan said the SAR operation was activated by the Maritime Rescue Sub Center (MRSC) Kuching as soon as a report was received at 9.15pm.

“Their disappearance was notified by one of the victim’s wives after she failed to contact her husband’s mobile phone and she was worried that the vessel they boarded could have capsized in Tanjung Po Waters,” he said in a statement, today.

Richard was brought to the MMEA base in Muara Tebas at about 1.30pm, where he was reunited with his family before he was sent to the Sarawak General Hospital for a medical examination.