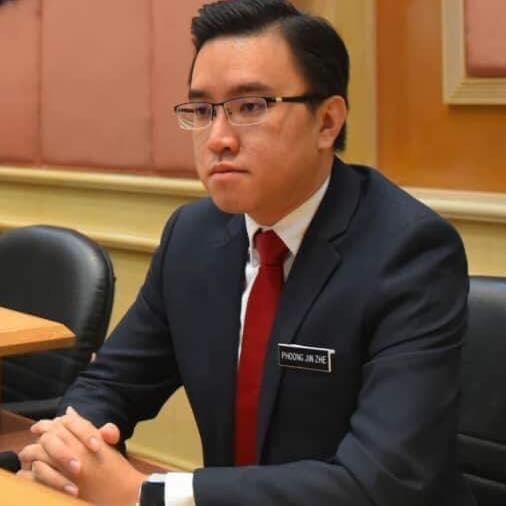 SANDAKAN: Sabah Democratic Action Party Socialist Youth (Dapsy) chief, Phoong Jin Zhe, rebutted the wrong and biased accusation by the opposition that the state had experienced an economic downturn under the rule of the Warisan government while neglecting to state the truth that the employed force had indeed, increased.

“This goes to show that Sabah Baru is well on track in good governance, under the governance and partnership of Pakatan Harapan and Warisan,” he said in a statement yesterday.

Phoong, who is also the caretaker Minister of Youth and Sports, explained at the opening ceremony of the Dapsy Sandakan Division Annual Meeting that the opposition had pulled up statistics that Sabah’s GDP had only achieved a mere 1.5 percent growth in 2018, which they deemed as significant drop compared to previous years.

He criticized the opposition for only presenting half-truths and the fact remained that in terms of employment rate and job opportunities, the current Sabah government performed better than the Barisan Nasional government from 2018 to 2019.

“According to data report from the Department of Statistics Malaysia (DoSM), the employment force of Sabah under the Barisan Nasional administration had significantly declined from 2016 to 2017.

On the contrary, from 2018 to 2019, Phoong said the Warisan and Pakatan Harapan-led Sabah government achieved an increase in employment in a meager one year.

“This shows that the government has worked hard in stimulating the economy, especially in the development of downstream industries and agriculture. This government strives hard to increase job opportunities because we know they are crucial for the youths.

“In 2016, under the administration of Barisan Nasional as state government, many young people lost their jobs and livelihood. However, in 2019 the employed population is positively increased to 83,100 in one year,” he said.

He continually stated that this achievement could not have happened on the strength of Warisan government alone but indeed required efforts from the Pakatan Harapan-led Federal government.

“The Sabah state government, under the leadership of Datuk Seri Shafie Apdal, and Federal Ministry of Finance under Lim Guan Eng had only governed for a short span of two years, but still managed to create 83,100 jobs in Sabah a single year. This shows that we are on the right track.

“So, if someone were to tell you that the Warisan is not doing a good job in managing Sabah’s economy, I hope everyone will look at the data. This data is not a bluff from me nor Sandakan MP Vivian Wong, but real statistics from the DoSM.

“Therefore, we prove to the people of Sabah that we have indeed created more job opportunities for the young people,” he stressed.

On other note, Phoong lamented the unfortunate turn of events when party-hopping culture and money politics had stalled the reform efforts and good governance brought about by the Sabah government.

He said Chief Minister Datuk Seri Shafie was therefore forced to dissolve the state assembly and return the mandate to the people to prevent a backdoor hijack of the government and the reform agenda.

“Were it not for this party-hopping culture, the state assembly would not need to be dissolved and the Warisan-led government will definitely continue its reformation efforts for our New Sabah – revitalizing downstream industries, developing agriculture sector and thereby attracting more young people back to Sabah into entrepreneurship, more jobs will be created, make the new Sabah stronger.”

During the meeting, Phoong emphasized that money could neither purchase DAP’s dignity nor the struggle of the party.

“Our struggle is this – to help the needy and those facing oppression. We need to help those who in need instead of helping the rich in Sabah.

“Lastly, as Dapsy members, I need to tell you that this government under leadership of Shafie have tried our level best. And indeed our economy did go well before the pandemic.

At the end of the speech, Phoong once again beseeched the people of Sabah to support the Warisan Plus and together defeat the frogs who betrayed Sabahans.

“Without your support, we cannot go on. We must defeat all frogs, crooks and the kleptocrat. We must reject them. We must ensure that the Sabah government is committed and accountable to the people of Sabah.

“Warisan, Upko and the Pakatan Harapan must work hand-in-hand to save Sabah and to save our beloved nation, Malaysia.

“It is not only for Sabahan but also for all Malaysians. If we lose in this snap poll, we will return to the dark ages,” he said.

He pointed out that as a youth, Sabahan desired a new era of politics in which the youths would govern.

“We refused the old politics, and reject any useless politicians who cannot develop the standard of living of Sabahans.

“I want to deliver an important message to everyone that we must help Warisan and Pakatan Harapan to win splendidly with absolute majority in this coming election, for a stronger mandate and stronger government.

“Through which, we can build a stronger Sabah,” he said.