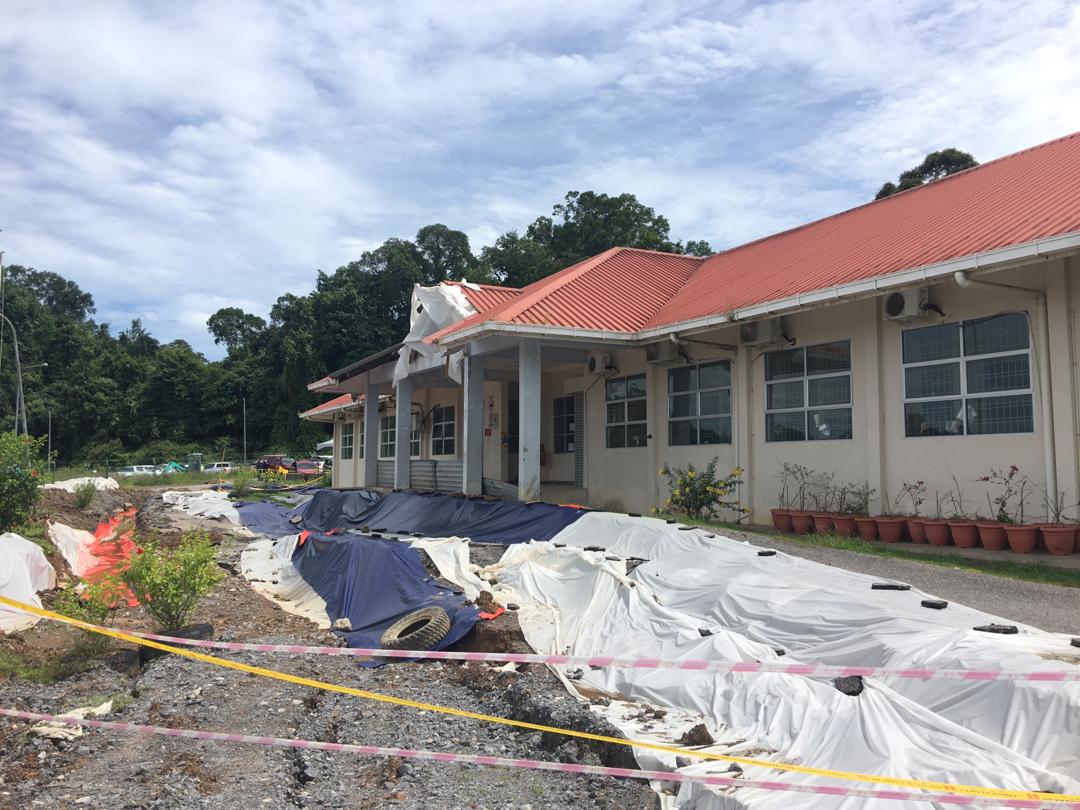 The situation at the Long Lama Health Clinic after the landslip in June.

BINTULU (Aug 27): The repair works for the Long Lama Health Clinic in Baram, which was closed recently due to a landslip, will begin next week, said Deputy Health Minister Datuk Aaron Ago Dagang.

“One of the projects is to repair or rebuild the access road to the staff quarters because the road has collapsed and it needs to be upgraded,” he told the Dewan Rakyat today in response to a question from Baram MP Anyi Ngau.

Aaron said the allocation for the works had been approved on July 3 and the appointed contractors are now transporting their heavy vehicles and other construction materials to the site.

He said a bigger project to be implemented in the area was the soil mitigation project and the tender would be issued by the Public Works Department Sarawak tomorrow.

According to Anyi, the health service for over 20,000 people in Long Lama has been temporarily shifted to the town’s community hall.

Landslip at the clinic, which catered for about 100 patients a day, had occurred in June this year.

Meanwhile, Aaron said a new health clinic will be built in Data Kakus, Tatau, under the Ministry of Health’s (MOH) long term plan.

He said a suitable site for the proposed new health clinic has been identified.

He said the ministry was aware of the urgent need to upgrade the health facility in Data Kakus which has about 1,000 people from five longhouses.

“For the time being a village health team consisting of medical officers from Bintulu health clinic provided mobile health care and services to 70 patients per day. The mobile health visit covering three to four days, once a month,” he said.

Aaron said this when responding to a question from Hulu Rajang MP Datuk Wilson Ugak Kumbong on whether the ministry intended to build new health clinics or upgrade the existing ones in Data Kakus and Bintulu as well as to upgrade the one in Sg Asap, Belaga.

“Sg Asap health clinic is type 4, with an average of 130 patients per day and the clinic has been upgraded in 2018 and become a centre of reference for other health clinics in Asap by sharing the resources such as laboratory. A total of RM700,000 allocation had been provided to equip the clinic with the medical equipment,” he said.

He said Sg Asap health clinic has 73 staff, consisting of five medical officers, and the dental clinic service had also been approved and was now in the procurement stage.

Ugak in a supplementary question stressed on the urgency for MOH not only to upgrade the medical equipment but also to upgrade the existing health clinic in Sg Asap to cater to the increasing population which led to congestion at the Bintulu health clinic.

Aaron in his reply admitted that about 500 to 600 patients were referred to Bintulu health clinic every year and he had visited Sg Asap recently with the elected representatives in the area.

“For the long term plan, we have discussed and agreed to build a new hospital near Sg Asap, at the junction of Murum and Bakun hydro,” he said.