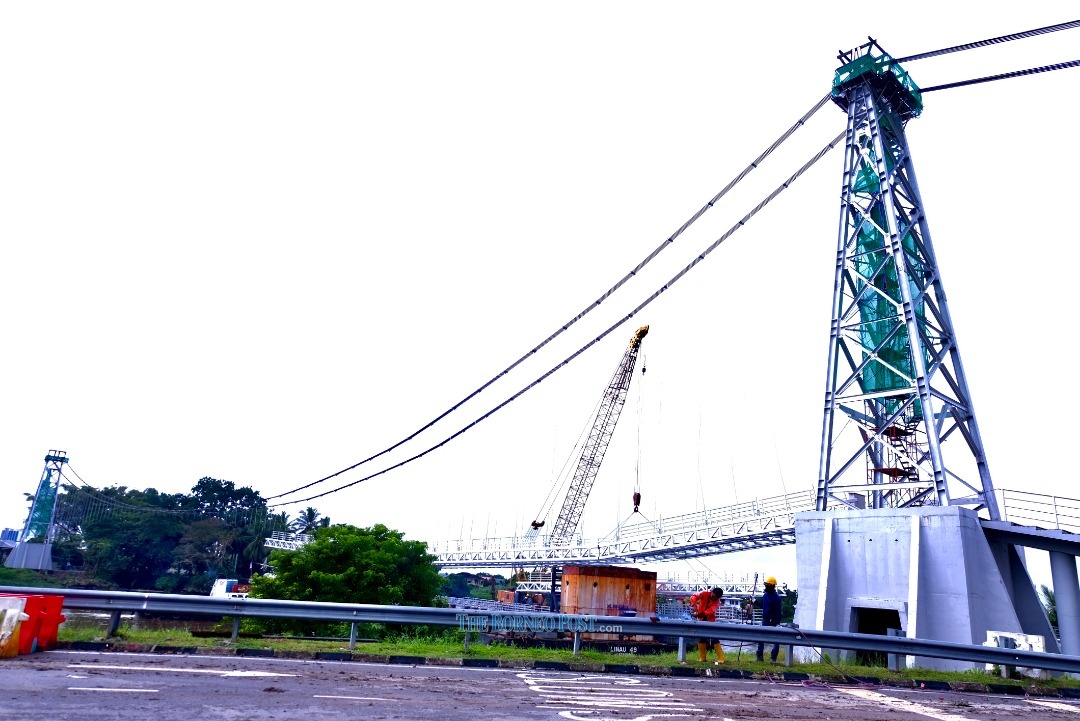 KUCHING: The public hope the Satok Suspension Bridge Project can be completed on time given the current rainy season, so that they do not need to find alternative routes due to road closure for the project.

According to a sign near the project area, the roads are closed from Sept 24 to Nov 30.

Vegetable seller Chiu Siew Hua, 53, hopes that the road closure will not be extended due to the current rainy season, as over two months is long enough.

She added that this had caused major jam in the area, adding that other road works done along the road did not help matters as it caused road users to slow down due to the uneven road, making the traffic jam even worse.

“They should not carry out so many road upgrading works at once in a single area. They should do it one by one,” she said when met at her stall today.

“It gives me headache, and my customers also complained as they have to use a longer road to leave the market. Some of them even tell me that they would just go home instead of turning into the market due to the hassle,” she lamented.

She added that this also caused her sales to drop as there were less customers coming to the market since the road closure.

She hopes that those in charge of the construction would consider opening one lane for vehicles to pass under the Satok Bridge and lessen the traffic jam in the area.

Despite the hassle, Chiu said she would continue to open her stall as it has been her way of life for over 40 years. She said she started selling vegetables at the five-foot-way at Gambier Street before moving to Satok Market and now at Medan Niaga Satok.

“I live in Mile 7, and despite the jam due to the flyover project there, I will still make my way here to open my stall,” she said.

Another vegetable seller Hartaini Masri, 48, said that due to the road closure, she had to use a longer route to get to her stall at the Medan Niaga Satok.

Aside from that, she also got complaints from her customers who found it a hassle to drive a long way after going to the market.

“The road closure caused jams at the alternative routes which is the old Matang Road as the new road. It is especially worse during peak hours as there are several schools in the area,” she said.

“For now, we just have to wait until the construction is completed, hopefully on time,” she said.

Hartaini, who lives at Jalan Depo, opens her stall at 7am and has to go through heavy jam in the area since the road closure started as she has to send her daughter to school. She has been running her stall for the past seven years.

On the suspension bridge, she said that it might turn out as a good tourist attraction if it is open to public like the Darul Hana Bridge at the waterfront.

A Sarawak kek lapis shop supervisor Fariza Junaidi, 36, said the road closure was done coincidentally when her shop decided to revert to its normal closing hours of 11pm.

Due to the Covid-19 pandemic, the shop has been closing earlier, at 7pm, she said.

“With the number of cases going down, we thought of opening until later but who knew, the road ended up closed and we hardly have anyone coming later in the evening. It’s so quiet here in the evening,” she lamented.

Aside from that, she also saw less customers at her shop and also the market since the road closure.

Her delivery team also have to drive a longer route transporting the cakes due to the road closure, and this caused delays in delivery.

On the bright side, she hopes that once the bridge is completed and open to public, it will bring in more tourists to the area and increase sales to businesses in the area.

According to the Public Works Department (JKR) Sarawak Corporate Communication Facebook page, the road closure is to dismantle bridge deck and other accessories, to complete the Satok Anchor Block and Matang Anchor Block, replace the saddles for both towers, complete the cable transferring works to the new Anchor Blocks, reinstall the bridge deck and other accessories, and the project is expected to be delivered by end of November.

The purpose of the dismantling is to reduce the loadings to the cables in order to increase the safety factor during the cable transferring works and saddle replacement works on top of the tower. The bridge itself is safe as confirmed by the recent load tests carried out on the bridge towers.

JKR director Datu Zuraimi Sabki in the post apologised to the public for the inconveniences caused due to road closure for safety reasons at Matang side as the contractor was currently expediting their works and would also continue to carry out their works at night.

“As such if the road stays open, it will be dangerous to both the public and the workers. All the decisions made were in consideration of the safety aspects involved,” he said.