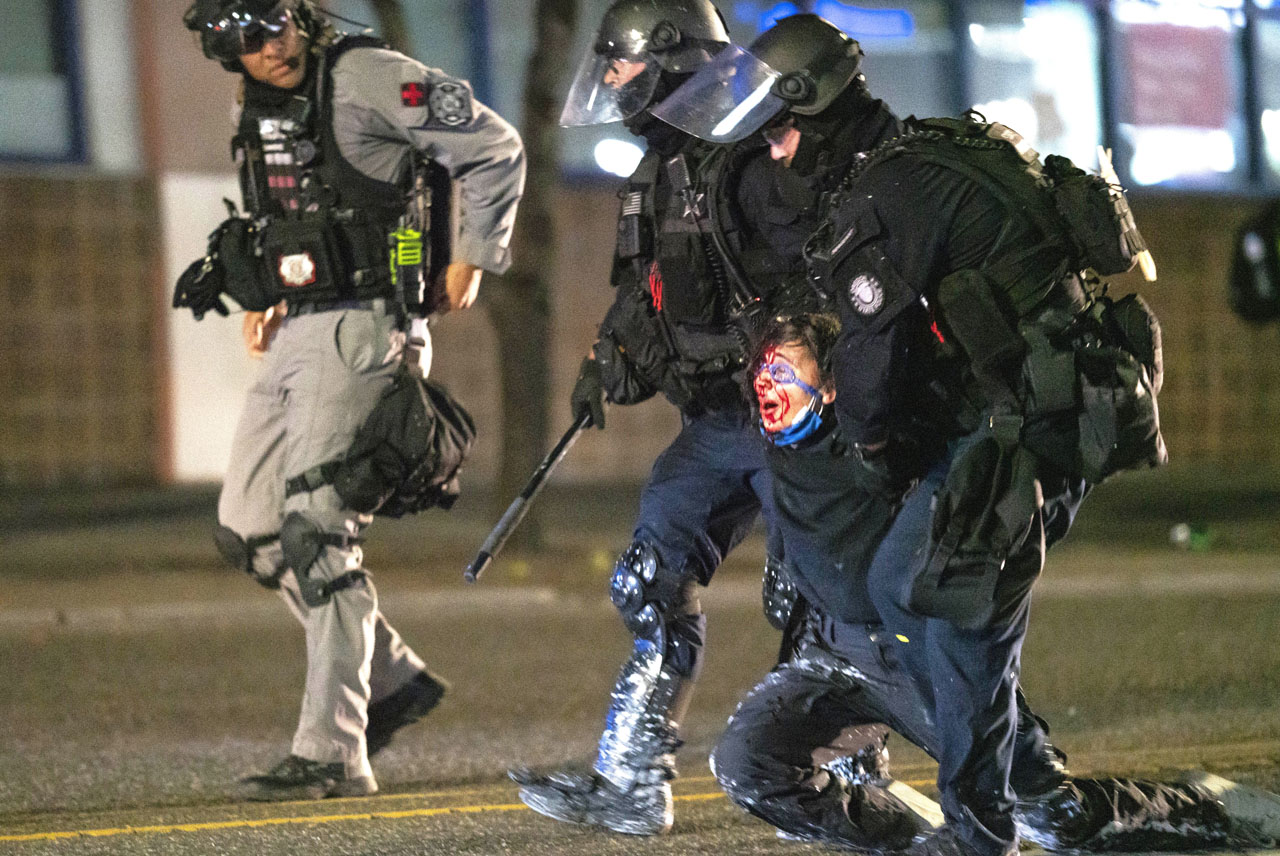 Portland police officers drag an arrested and injured protester during a march against racial injustice and police brutality in Portland. — AFP photo

PORTLAND: Police arrested dozens of people and used tear gas against hundreds of demonstrators in Portland late Saturday as the western US city marked 100 days since Black Lives Matter protests erupted against racism and police brutality.

Police quickly declared the rally a ‘riot’ after protesters hurled Molotov cocktails at them, and they responded with a barrage of tear gas to disperse the crowd.

At least one person was injured by the fire bombs, police said.

Officers arrested dozens of protesters in an ensuing game of cat-and-mouse through a residential district of east Portland.

“It was Day 100 for Black Lives Matter protests in Portland since George Floyd’s murder and they wanted to prevent us from marching,” said 20-year-old protester Jay, her eyes red from the tear gas.

“It’s our constitutional right to be here and to express ourselves.”

“This is a riot. Police are giving announcements to disperse. People are throwing Molotov cocktails,” Portland Police said on Twitter.

The nightly protests were sparked by the death of George Floyd while in police custody in Minneapolis in May.

Floyd’s death triggered similar protests nationwide, but it is in Portland — a city of 650,000 that is more than 70 per cent white — that activists have remained on the streets practically every night, demanding racial justice and police accountability.

President Donald Trump has cast the city as being under siege by ‘thugs’ engaged in ‘domestic terrorism,’ though the demonstrations have been peaceful for the most part.

Tensions escalated again last weekend after a man identified as a supporter of a right-wing group was shot and killed.

Earlier Saturday, hundreds of people gathered in a park near Portland in a memorial for Aaron ‘Jay’ Danielson, a supporter of the far-right group Patriot Prayer.

The 39-year-old was fatally shot after he joined pro-Trump supporters who descended on Portland, sparking confrontations with Black Lives Matter counter-protesters.

The suspect in the shooting, Michael Reinoehl, 48, was killed in neighboring Washington state as police tried to arrest him.

The circumstances of Danielson’s death are still under investigation but Reinoehl appeared to acknowledge shooting him in an interview with Vice News.

Apart from the homage to the victim and the groups of men with assault rifles or pistols, the atmosphere at the park in Vancouver, just north of Portland, was almost partylike.

But Dann was gloomy about the run-up to the presidential election.

Carrying a skateboard and with a pistol on his belt, Daparu De Crusha, 51, said BLM protestors were trying to destroy the American family.

The former publicist was convinced that Danielson was not killed by chance.

“I believe it was orchestrated, it was a hunting,” he said. “There was going to be a human sacrifice that night and Jay Danielson was their victim,” he said.

After citing conspiracy theories about China and Bill Gates, De Crusha said Trump’s victory or defeat on Nov 3 would not change the country’s problems.

“It’s not going to end with the election,” Dann agreed.

“The only thing that’s going to stop it is if we the people stand up for our rights and are not intimidated,” he said, wearing a ‘Make America Great Again’ cap and sporting a ‘We the people’ tattoo on his arm.

“I don’t want to see anybody encourage any acts of violence in the name of Jay,” he said.
— AFP