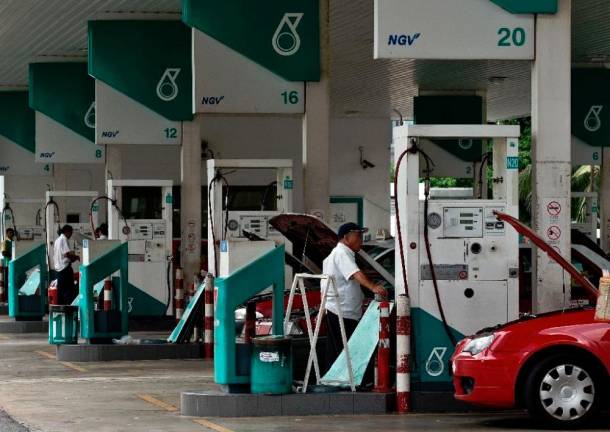 The decline was mainly attributable to lower overall sales volume by 39 per cent y-o-y and lower overall average selling price by 37 per cent. — AFP photo

KUCHING: Petronas Dagangan Bhd’s (PetDag) reported profit for its second quarter of financial year 2020 (2QFY20) came in at RM3.5 million which was below analysts’ and consensus’ full-year earnings estimates.

Comparing against 2QFY19, PetDag’s revenue dipped by 61.5 per cent year on year (y-o-y) whilst its bottomline plunged by 98 per cent y-o-y.

MIDF Amanah Investment Bank Bhd (MIDF Research) said the decline was mainly attributable to lower overall sales volume by 39 per cent y-o-y and lower overall average selling price by 37 per cent during the quarter due to low MOPS price and the enforcement of movement control order (MCO) during the quarter which has restricted both movements of households as well as; businesses nationwide.

“However, the lower selling price and sales volume were offset by lower advertising and marketing costs during the quarter which helped to arrest the sharp decline in earnings.”

MIDF Research expect the operating environment will remain challenging for the remainder of the year for PetDag with air travel to remain restricted and demand for crude and crude-related products to continue to be impacted by the ongoing development of Covid-19 which has seen new cases emerging in countries that have eased lockdown measures.

“This new development could cause demand recovery to stunt and oil price to remain trapped at current levels for the remainder of the year,” it added.

“Despite the earnings revision, we continue to view PetDag positively given its ongoing effort in mitigating the impact from lower selling prices and sales volume via increasing pump productivity; aggressive marketing and product promotions and creating brand stickiness via SETEL mobile application.

“Additionally, its fundamentals remain intact and dividend yield is decent at 2.9 per cent for FY21F.”

Looking ahead, Kenanga Investment Bank Bhd (Kenanga Research) expects PetDag to see a better second half of the year.

“While 1HFY20 was plagued by weaker sales demand due to the implementation of the MCO, a stronger 2HFY20 is largely expected, given the easing of lockdown measures leading to a gradual recovery of overall economic activities,” it said.

“This also comes in tandem with mild rebound in crude oil prices of late, which should see some improvements in the group’s ASPs and margin spread. ”