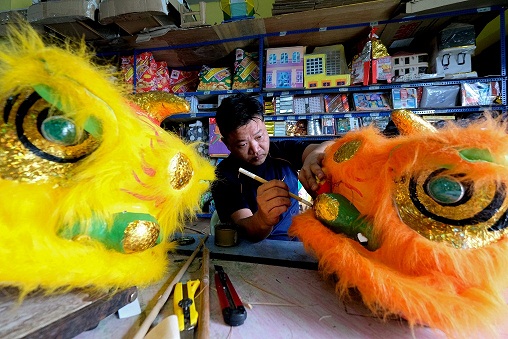 This Chinese New Year is particularly sad for lion dance outfit repairer Lu Tshun Yaw as none of the associations seek his service this year due to the Covid-19 SOP which disallows the popular festive performances.

SANDAKAN: It will be a quiet Chinese New Year with the on-going pandemic and movement control order and one person already affected by the subdued traditional festivities is lion dance costume repairer Lu Tshun Yaw.

Every year, days before the arrival of the New Year, Lu, 41, will be kept busy sewing and repairing lion dance outfits, but this year there is nothing much for him do.

Lu who learned the tricks of the trade from his father since he was nine said, usually months ahead of the celebration, he would get about 20 sets of lion dance outfits to work on, sent by the various lion dance associations.

“It will usually take me a week to repair and repaint one lion dance head, but this year, none of the associations has approached me,” he said.

“It is sad not being able to enjoy the lion dance, the beat of drums and clashing cymbals this year but we understand that it is for the good of the people, in curbing the spread of the virus,” he told Bernama when met at the shop where his family has been operating for the past 40 years.

“We have no choice but to look elsewhere to generate income. I am now making religious and prayer materials for Chinese funerals, apart from repairing gongs and other traditional musical instruments,” said

He hoped the Covid-19 pandemic would end and things would return to normal soon. – Bernama