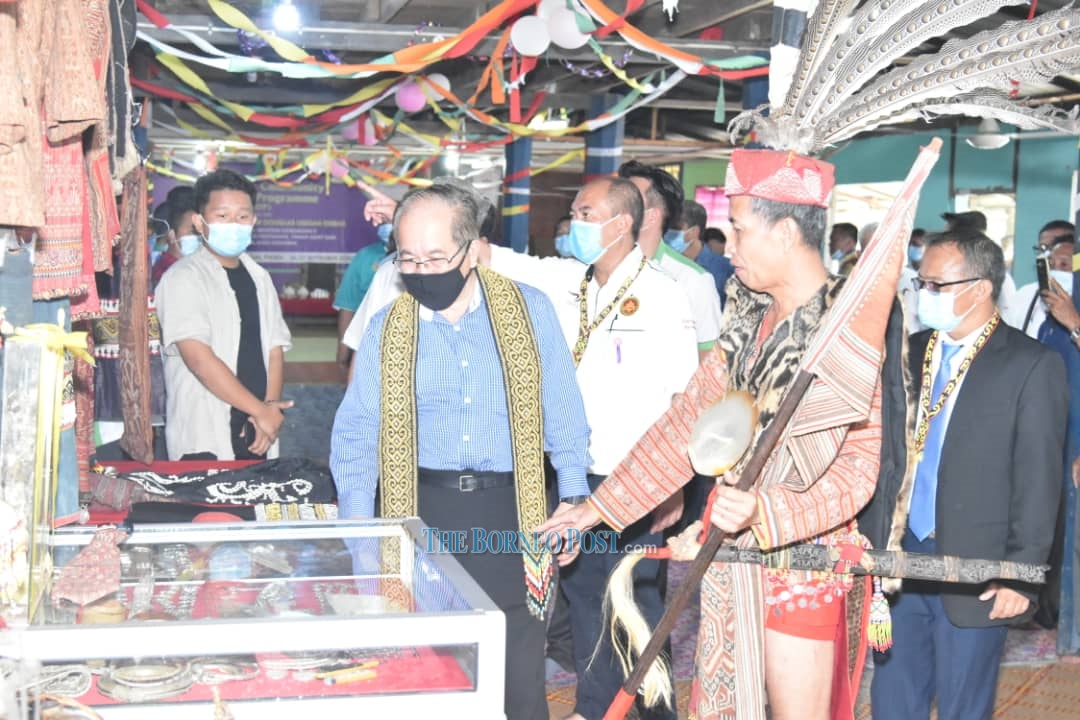 Uggah (centre) seen admiring old artifacts on display at the longhouse during the event at Nanga Buai today.

BETONG (Sept 27): Deputy Chief Minister Datuk Amar Douglas Uggah has reassured all Native Customary Rights (NCR) landowners that they will be consulted first before the Section 6 perimeter survey is done on their land.

He said that there had to be a consensus from all parties concerned and all had to agree to allow the government to come in so that the survey could proceed smoothly.

“The government will not come in if not invited, and neither will it force its decision on the people,” he said when officiating at the Agriculture Department’s Agriculture Community Outreach Programme (AgriCOP) at Rumah Nelson James, Nanga Buai in Layar near here today.

Apart from that, Uggah also said that the state government did not want a situation where people who disagreed or got overly emotional would go to social media to express their dissatisfaction and frustration, especially since elected representatives could always be consulted if they needed advice on the matter.

For him, Section 6 was a necessary phase before Section 18 where the individual land titles would be issued.

Touching on AgriCOP, Uggah who is also Agriculture Modernisation, Native Land and Regional Development Minister said it was to publicise the department’s various agricultural programmes available for the people and to inform them on modern agriculture developments and options.

“The state government was introducing them to help farmers generate more income because farmers need to diversify their activities. It is unwise to rely on oil palm or pepper or rubber alone as when the price drops, they will be adversely affected,” he said.

He also announced a grant of RM200,000 to purchase fertigation farming units for the 22-door Nanga Buai longhouse besides another RM10,000 grant for its village security and development committee fund.

Meanwhile in his speech, Rentap suggested the formation of a community museum in Betong to house the many traditional cultural items of the Betong division Iban community.

“The Betong Iban womenfolk have excellent traditional weaving skill from the old days and those old pieces in their collection can be exhibited in the museum.

“The new generation can appreciate them and for them to be inspired enough to learn to reproduce them to keep the tradition alive,” said Rentap.