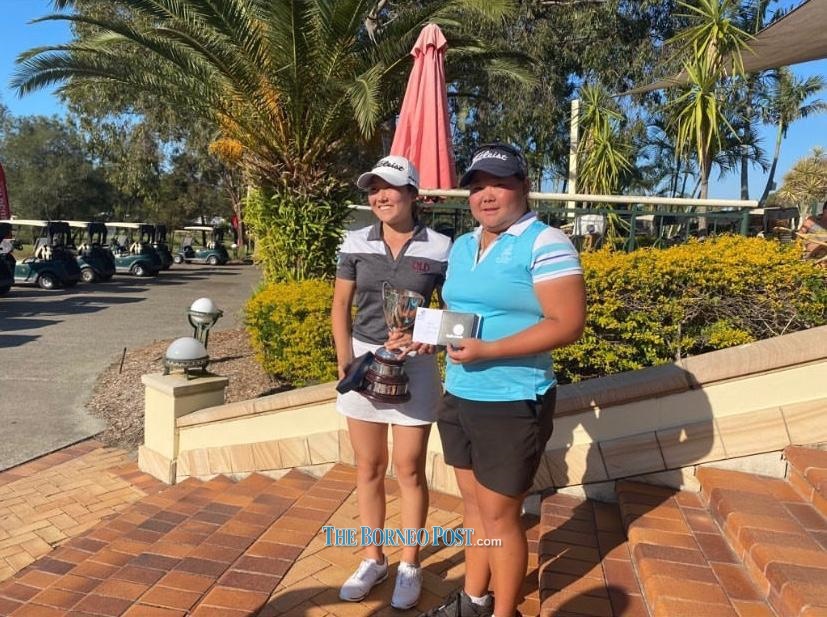 Mirabel poses with Higo at Arundel Hills Country Club after the prize presentation.

It was her second tournament of the year.

“It has been a long week and it’s now finally over. I made the finals and I would like to congratulate Lion (Higo) for winning the matchplay.

“It was really a tough match out there today,” said a relieved Mirabel.

She expressed her gratitude to her parents and grandparents for their constant encouragement as well as the Hills Golf Academy, coaches, relatives and friends for their continuous strong support.

Mirabel had qualified for the match play finals involving 16 players after carding a four-day total gross score of 22-over par 310 (86-77-71-76) in the Queensland Women’s Stroke Play to finish in joint fifth spot with Haruhi Nakatani.

Meanwhile, her older brother Malcolm Ting Siong Hung could only a manage a joint 21st placing after registering a four-day total gross score of eight-over par 292 (67-74-77-74) in the men’s category comprising 143 players in the Queensland Men’s Stroke Play at Southport Golf Club.

He failed to make the cut for the Match Play finals.

However, the 18-year old Sukma golfer, who is also representing Hills International Golf Club, had the consolation of a hole-in-one feat on the first day when he shot a four-under par 67.

It happened to be his third HIO after acing them in Miri and Kuching events.

The Match Play champion was Louis Drobbelaar who beat Jack Tanner in the final.