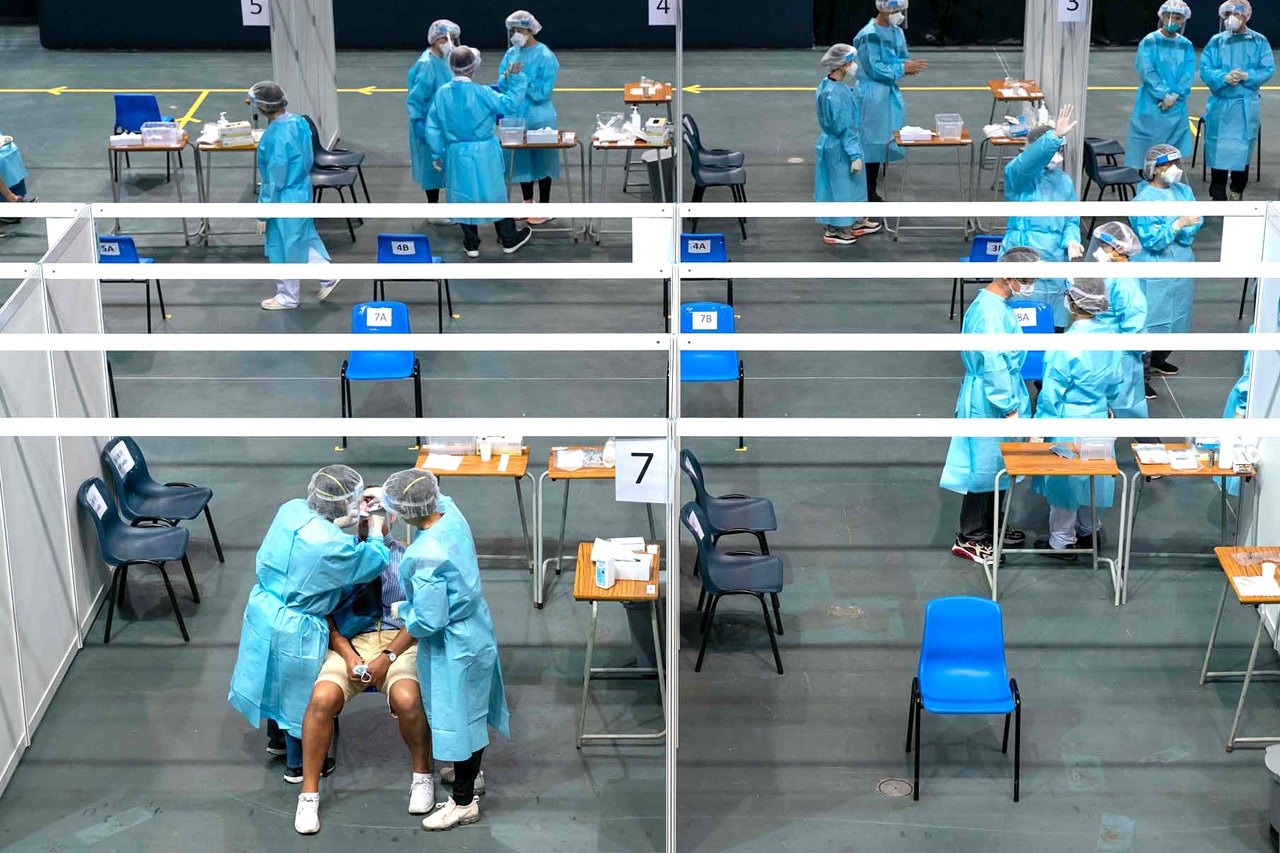 PARIS: Millions of mask-wearing European children headed back to school yesterday after summer holidays despite rising numbers of coronavirus infections, as Hong Kong rolled out a mass coronavirus testing programme.

Schools reopened in Russia, Ukraine, Belgium and France, where teachers and their pupils aged 11 and older were obliged to wear face coverings, echoing regulations in place across the continent.

Russia’s 17 million school children returned to class as the country confirmed it had passed one million infections — still well behind the tally in the US, now higher than six million.

The US is hosting the world’s first major tennis tournament since the virus hit but it has not been plain sailing at the US Open, where one player was sent home after testing positive and other players are grappling with eerie empty arenas.

“It’s a little bit weird to play without fans and without the support and the atmosphere on the centre courts,” said former champion Angelique Kerber.

The virus emerged late last year in China and has now infected more than 25 million people and killed almost 850,000.

The Chinese city at the centre of the initial outbreak, Wuhan, took another leap back to normality on Tuesday when its almost 1.4 million youngsters also returned to schools and kindergartens.

State media broadcast images of thousands of students hoisting the Chinese flag — a daily routine at all public schools — despite warnings to avoid mass gatherings.

European countries have faced an upsurge in cases in recent weeks after successfully suppressing the numbers, a similar story to Hong Kong where three-quarters of cases have been detected within the past two months.

However, Hong Kong’s attempts to roll out a mass testing scheme have been hampered by distrust of officials following China’s crushing of the city’s democracy movement.

Doctors and testing firms from mainland China are involved in the programme, fuelling public fears that their DNA and data will be harvested to create a system of control underpinned by biometrics.

“I think it’s a waste of time,” local resident Emily Li told AFP. “The government can’t convince me in terms of the effectiveness of the testing programme.”

Distrust of officials continues to fuel protests across the world against social-distancing measures, mask-wearing and other regulations.

Several European governments have promised not to try to enforce more lockdowns of the severity seen earlier this year when businesses were forced to close and millions of people were confined to their homes.

“I am convinced that we can and will prevent a second general shutdown,” Germany’s Economy Minister Peter Altmaier said yesterday as he unveiled figures suggesting his country has passed the worst of its recession.

The lockdowns helped to flatline large parts of the global economy and led to widespread resentment.

“The confinement period was hellish,” said Florence, a 42-year-old mother-of-three in the French Riviera city of Nice.

“We will not go through it again, it’s out of the question.”

However, hopes that a vaccine will be developed soon were dealt a blow yesterday when French company Sanofi said it was cancelling research on its candidate drug — one of several to have made it to the final stage of testing.

The drug “did not give us the results we were hoping for”, said the firm’s research chief John Reed.

The return to normality has been slow, not only for the economy but also for wider society.

Tennis players have described the situation at the US Open as a ‘bubble within a bubble’.

French player Benoit Paire fumed after being sent home from the New York tournament, writing on social media: “I hesitate to tell what is really going on in this Fake Bubble.”

The US organisers later said in a statement a player had flouted safety regulations, without naming Paire.

And footballers also were having a rude awakening in Latin America.

Ecuadorian football authorities fined a top-flight player US$1,200 for kissing the ball — a breach of hygiene rules brought in to combat the virus. — AFP