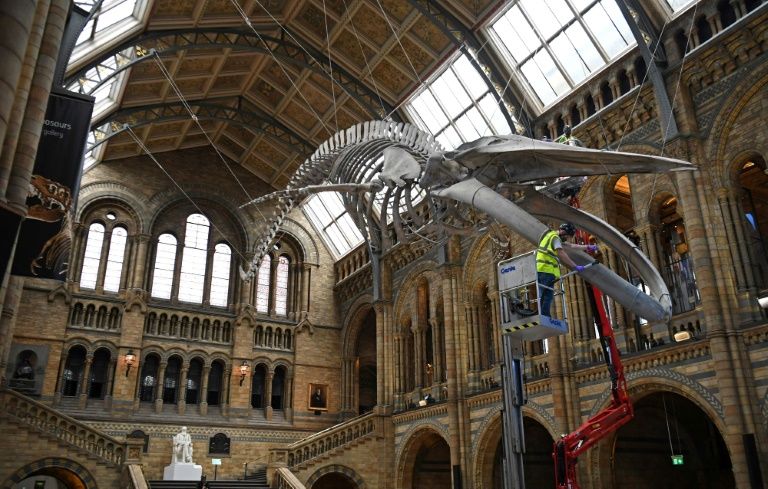 The Natural History Museum, with its array of dinosaur skeletons, remains one of London’s biggest draws. – AFP photo

But today, only a handful of children shriek in delight as it roars.

With tourists staying away and visitor numbers limited due to coronavirus, the popular exhibit is unrecognisably quiet — as are many of the British capital’s museums and galleries.

It is tough for the institutions’ finances, but the lack of crowds is a boon for the few foreign visitors and for locals, who are taking the opportunity to explore their own backyard.

Lynsey Wheeldon, 39, from Dunstable, north of London, headed straight to the dinosaurs when she visited the Natural History Museum with her children on a hot August day.

“We got in straight away and it was only us and maybe six or seven families,” she said. “We got to see things — it’s been great!”

Still worried about catching coronavirus, she was reassured by the decision to let in just 20 percent of normal visitors.

“We probably wouldn’t have come if it wasn’t this quiet,” she told AFP.

Foreign visitors usually make up 70 percent of entrants to the Natural History Museum but this has fallen to three percent since it reopened on August 5 — and 57 percent were Londoners.

For those tourists who do run the gauntlet of Britain’s rapidly-changing quarantine rules, the calm in the city is also refreshing.

“There isn’t the crush, there are no queues… for us tourists, it’s paradise,” said Frenchman Michel Besse, visiting with his family.

Britain has been badly hit by coronavirus, with more than 41,000 people dead, and despite the easing of lockdown many people are still nervous about venturing out.

As they slowly reopen, London’s tourist sites, museums and galleries have made great effort to show that they are safe.

Visitors must pre-book timed tickets, some galleries have introduced one-way systems, sanitising gel is on hand and face masks are required by law.

Some exhibits considered too risky are shut, from video installations in small rooms to interactive displays.

But in return, a visitor can roam alone in the V&A’s Cast Court, or linger in front of a Rubens at the National Gallery without being jostled.

“It’s brilliant. You can see things without loads of people barging around,” said Londoner Jane Barnett, 62, during a visit to the Tate Modern gallery of contemporary art.

Yet as they looked over to the Millennium Bridge, the usual crowds thinned to barely a dozen people, her sister Katie Clarke said it was bit too quiet.

“Walking down the South Bank — there’s no buzz. It’s not London,” said the 55-year-old, who was visiting from out of town.

At the National Gallery, in the near deserted cafe overlooking a desolate Trafalgar Square, 63-year-old Londoner Gavin Green said the lack of people was “a bit weird”.

“They could probably relax things a bit” and allow more people in, his wife Katherine added.

Like others roaming London’s museums this summer, the Greens are aware that they were hard hit by lockdown and desperately need visitors to survive.

The Tate galleries are planning to axe 300 jobs in their shops and cafes after director Maria Balshaw has said she expected only half as many visitors for the forseeable future.

Most museums and galleries offer free entry for the permanent displays, but they encourage donations when booking a ticket — and the V&A has contactless payment points around the site.

Marshalling her children towards another exhibit, Wheeldon urged her fellow Britons to support their cultural institutions.

“Everyone needs to come back. It’s safe enough to come, and these places can’t survive if they don’t have visitors,” she said. – AFP