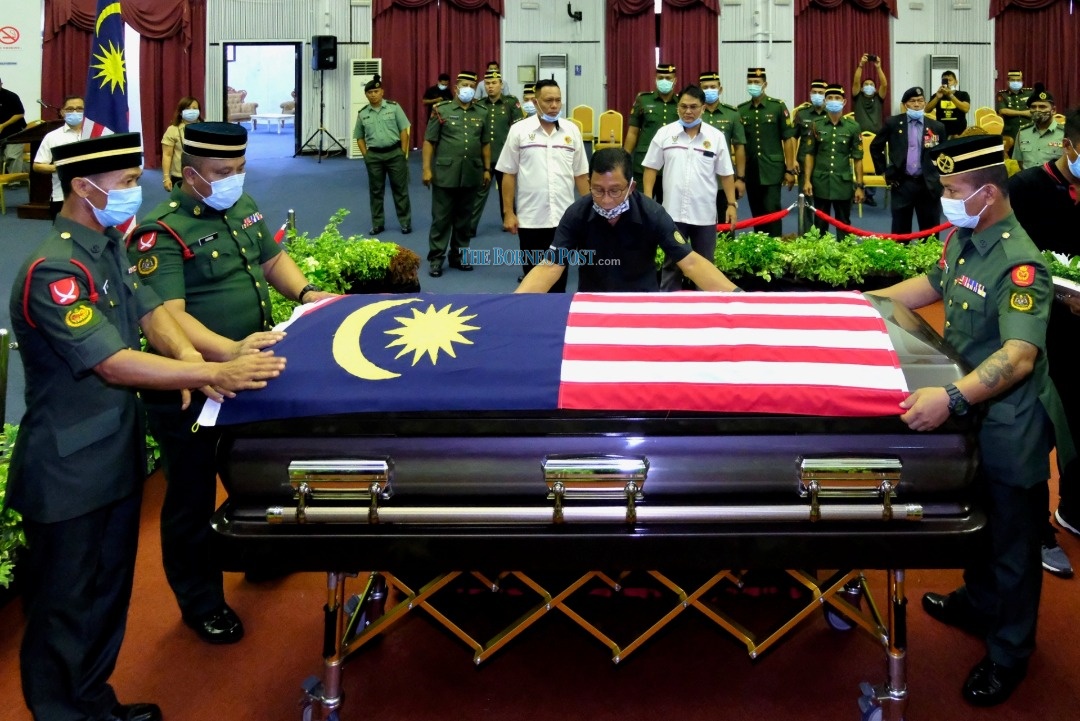 Members of the Malaysian Armed Forces (ATM) placing Awang Raweng’s casket on a platform before the wake at the Kuching Civic Centre begins. – Photo by Muhammad Rais Sanusi.

KUCHING (Sept 20): State Iban leaders thanked the Sarawak government for according a state funeral to former Iban trekker and the nation’s sole recipient of the George Cross gallantry medal, the late Datuk Awang Raweng, at the Heroes Memorial here.

Deputy Chief Minister Tan Sri Datuk Amar James Masing said Awang Raweng deserved such honour for not just his bravery in the frontlines during the emergency period, but also his sacrifice for the sake of the country’s security.

“I’m very pleased that the state government is giving him a state funeral. He deserves it. He should be recognised, and he is the highest civilian given the honour of bravery – the George Cross,” he said.

Masing was speaking to reporters after paying his last respect to Awang Raweng at the wake at the Kuching Civic Centre here this afternoon.

Awang Raweng passed away on Friday (Sept 18) at the age of 91 at his son’s residence in Sri Aman at around 2.15pm.

His body was brought to Kuching so that he would be buried at the Heroes Memorial on Monday (Sept 21).

“Nonetheless, I’m very pleased that the state government honoured him by giving him a state funeral for what he has done,” said Masing.

Awang Raweng was awarded the George Cross — the second highest award in the United Kingdom’s honors system after the Victoria Cross — on Nov 20, 1951.

As a member of the Worcestershire Regiment, he fought off 50 communists while defending the position of an injured British soldier, Private G Hughes, in Johor in May that year, despite sustaining serious injuries himself.

In a previous interview, Awang Raweng had reportedly held a live grenade in his left hand after his right hand was severely injured in the gunfight, and dared the communists to attack him, subsequently holding them off and forcing them to withdraw, saving Private Hughes’ life in the process.

He was also conferred an honorary master’s degree in education strategy by Universiti Pertahanan Nasional Malaysia in 2015.

Masing said he was also involved in assisting Awang Raweng accompanied by his two grandsons to fly to the United Kingdom a few years ago to meet Queen Elizabeth II.

“So at least I had that opportunity to assist him in whatever way I could.

“I think the people of Sarawak should understand that regardless of whoever you are, which race you belong to, you got to honour those who sacrificed their lives for the security of this country,” he said.

“I could not thank the state government enough for all its consideration and good deeds and respect, because Awang Raweng is our first hero earning the George Cross. It is not easy to get. It is the second highest honour in the Commonwealth and not many got it, about 20 in the Commonwealth, and he is the only one from Malaysia,” he said.

Jabu recalled the time when he worked together with Awang Raweng in 1989, when he was tasked by the then chief minister Tun Pehin Sri Abdul Taib Mahmud to conduct a reburial for Iban warrior Rentap at Bukit Sibau.

“To conduct the reburial ceremony, customs require several brave men as celebrants, and Awang Raweng was one of the brave men I called to participate,” he said.

Among other brave men who were called to participate were the late Datuk Temenggong Kanang Langkau, Jabu added.

After the ceremony was over, he said Awang Raweng would need to travel quite a distance to get back , and so Jabu offered him a lift in his helicopter.

“I took the privilege of sending him back by helicopter over to his longhouse,” he said.

“I know him very well. He has been a very good and loyal friend. In fact we were very happy together when he was awarded a datukship in 2018.

“I am also partly responsible for making a recommendation to the government for him to get datukship for his service to the state and the country.

“It is a great loss but everybody has got to go, and only god decides when one is to go,” said Jabu.

State Secretary Datuk Amar Jaul Samion said the state funeral accorded to Awang Raweng would be in conjunction with the Malaysian Armed Forces (ATM), the veteran associations and the Sarawak Veteran Affairs Department.

“I would like to convey my heartfelt condolences to the family of the late Datuk Awang Raweng, our hero, on his passing.

“This is one of the most important qualities that he has – selfless, courageous, determined – to ensure that our nation and country is free from any dangers during those emergency period,” he said.