“I cried that night knowing I was the first Dayak, a lot is expected from me — they want the best and people were telling me to make Malaysia proud,” she told Malay Mail yesterday.

“To be the first Dayak woman to win the title is a huge responsibility and it’s a great honour.”

Born into a culturally diverse indigenous family — an Orang Ulu Kayan-Kenyah father and an Iban mother — Francisca understands the importance of ethnic minority representation and is eager to share East Malaysia’s rich heritage with the rest of the world.

“My dad’s longhouse has 110 doors, the longest longhouse in Malaysia and my mum has a longhouse in Sungai Poi, Kanowit — my childhood was full of cultures and traditions.

“Even in Kuching, not many students will have the same background as me which is Kayan-Kenyah-Iban but to have Orang Ulu and Iban mix is a bit rare.

“It’s a unique way of experiencing life,” she said, looking regal in a metallic pleated Khoon Hooi gown.
If there’s one thing the beauty queen wants the rest of Malaysia to know about her culture, is that all indigenous tribes have their own tradition.

“People always think Iban and Orang Ulu are the same but they’re completely different and back in the day, they used to be warring tribes but with time they became friends and made peace,” she said, offering a fun fact.

“I would like Malaysians to know more about what it’s like being a native person through understanding our heritage and culture.” 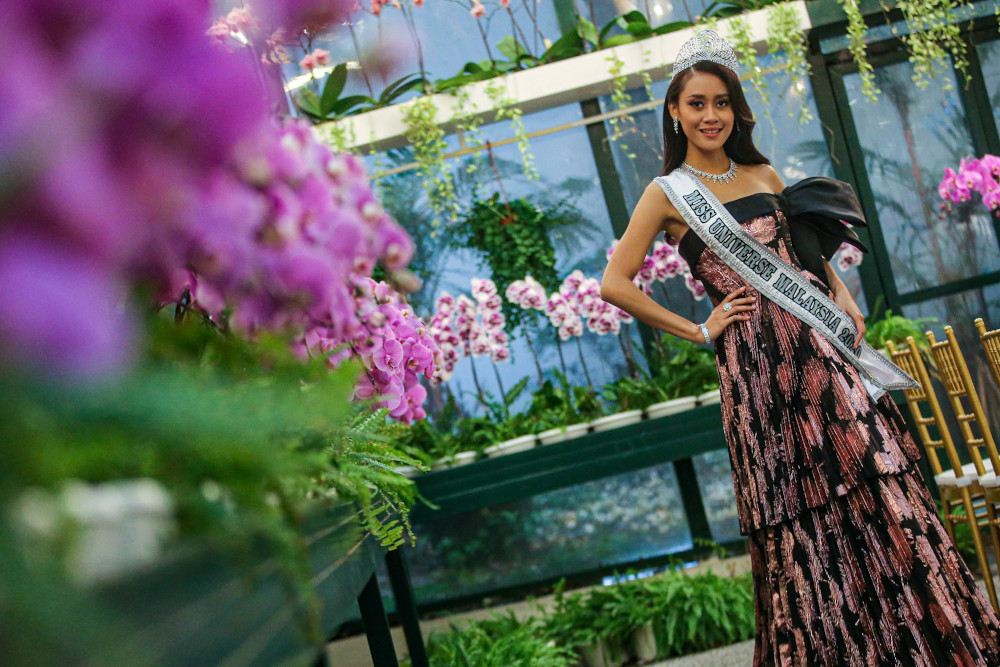 The former public relations and marketing executive says she wants Malaysians to know what’s it like being a native person by understanding indigenous cultures. — Picture by Hari Anggara and Ahmad Zamzahuri

The former public relations and marketing executive has chosen women’s empowerment as her cause to champion and it has been a subject close to her heart since 2016, the year she began joining pageants.

In March, she had planned a campaign to empower single mums and women who didn’t have the chance to complete their studies but the movement control order forced the project to take a backseat.

“We invited ministers to drop by these booths to see how they can work with them or what they can do in terms of entrepreneurship or training to start their own business,” she said.

Now that mini gatherings are allowed during the recovery movement control order, Francisca and her team are hoping to get down to business.

“I believe if you want to grow better together, we need to empower each other and not in the sense of ‘Oh you look great today’ but in terms of showing positivity and working together as one.

“I don’t want people to think beauty pageants in Malaysia are just about sending out beautiful faces, I would love to see my work in women’s rights continue even after my reign,” she added.

All this, Francisca said, comes from a personal place.

Back when she was a student at an all-girls school, she was often bullied because she wasn’t considered beautiful — she was athletic, skinny and had a tan complexion from playing sports under the sun.

“I understand how it feels to be among groups of girls but not feel empowered.

“It’s not nice to feel that way because we are all girls and some put you down to feel powerful.”

With all eyes on East Malaysia lately, from Sabah’s upcoming election to internet connectivity for rural folk, Francisca also spoke about the inequalities between the mainland and its states in Borneo.

“We have to understand where the issue stems from, why do we have inequalities in West Malaysia and East Malaysia, where does this inequality start from and how can we find a solution.

“Making people aware is one thing, but people need to speak up and share their opinions on how they think the gap can be bridged,” she said.

As she prepares to secure a placing in the 69th Miss Universe pageant, Francisca said she always considers herself Malaysian first instead of just Sarawakian and hopes to make her fellow Malaysians proud.

“I want to take this opportunity to represent minorities in Malaysia, it’s something we rarely see.

“Also, to show the other side of Malaysia that people don’t know — it’s mysterious and interesting,” Francisca said. — MalayMail