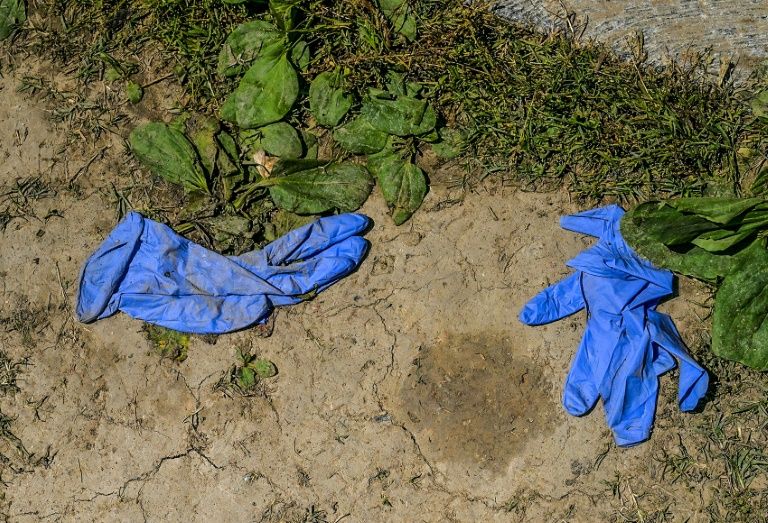 Police say 35 tonnes of gloves used at hospitals were ready to be sold. AFP Photo

Indian police are battling a booming black market in used face masks and surgical gloves scavenged in some cases from hospital refuse tips, as people scramble for cheap coronavirus protection.

Police in the western city of Navi Mumbai said Friday that they seized from one gang 3.8 million pieces of refurbished single-use surgical gloves that were washed, dried and packed ready for sale.

“They sourced nearly 35 tonnes of used gloves from different hospitals and were preparing to sell it to dealers at throwaway prices,” investigating officer Subhash Nikam told AFP.

“They had managed to sell 6,000 to 10,000 pieces and were in touch with several buyers for the rest of the consignment,” he said.

The four accused are facing initial charges of cheating and endangering lives by spreading a communicable disease.

Demand for personal protection equipment has soared in the country of 1.3 billion people, which on Friday saw the official tally of coronavirus infections hit 3.4 million with over 60,000 deaths.

Many experts say that with India not testing enough people and many deaths not properly recorded, the real toll could be considerably higher. Several antibody tests have borne this out.

Many Indians though cannot afford proper PPE and use cheap alternatives including a handkerchief or scarf wrapped around the mouth and nose.

Health authorities in the eastern state of Bihar said they too have busted several gangs in recent months involved in selling used facemasks collected from hospital dump-yards.

Thousands of masks have been seized that were washed and repacked before being sold to dealers across cities at cheap prices, the official said.

“We have conducted several raids in the state after receiving tip-offs about the sale of used facemasks,” an official from Bihar’s health ministry said.

The illegal business is at a very small scale, he added, but poses a serious health hazard at a time when the country is reeling under the pandemic.

The virus spread had also fuelled a market for sub-standard sanitisers.

India had briefly faced a shortage of personal protection equipment before it imposed an export ban to meet the rising domestic demand, including from front line coronavirus workers.

Even before the pandemic India had a huge market for discarded medical equipment, including disposable syringes that have been long blamed for spread of infections like HIV and hepatitis. — AFP