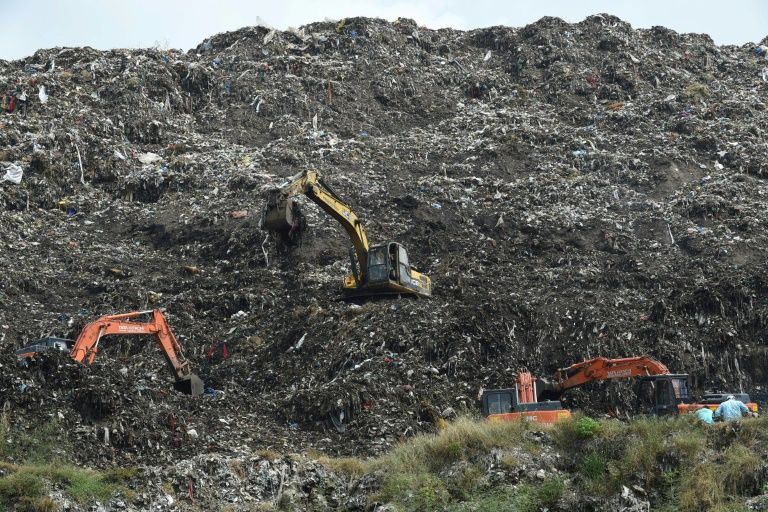 The search continues for Neha Vasava, who was buried under a garbage heap. AFP Photo

The search for a 12-year-old girl buried under a huge garbage heap in western India entered its fifth day Wednesday, with hopes fading fast of finding her alive.

Neha Vasava was on top of a 25-30 metre (80-100 feet) mountain of refuse at Ahmedabad’s biggest rubbish dump — where she and her family eke out a living — when it collapsed on Saturday evening.

Rescuers have since been sifting through tonnes of stinking garbage and braving feral dogs that roam the area, spread over some 80 acres (32 hectares).

An estimated four million Indians — many of them children — work in filthy, dangerous conditions, as  “ragpickers”, sorting through trash for metal and other materials to sell.

“The chance of her being alive is negligible, but we will continue the search till we find her,” fire officer Naitik Bhatt said Wednesday.

He said six earthmovers had been deployed in the frantic search, which had been made more difficult by a spell of rain.

“A few hours after she got buried there was rain because of which more garbage could have fallen from the top,” Bhatt told AFP.

A six-year-old boy, who was scavenging with Vasava, was rescued shortly after the collapse.

Nearly 3,500 tonnes of waste from Ahmedabad city is dumped at the site every day.

The dump, called Mount Pirana by locals because of its height, is home to several hundred impoverished families who live in shanties without piped water or sewage systems.

“We earn our bread by selling the scrap we collect from the dump,” Mahesh, a ragpicker, told AFP.

“We are lucky if we get picked up by some contractor for labour work… Otherwise the only option we have is to sell the scrap,” added the 30-year-old, who was working without any protective gear.

According to UNICEF, well over 41 million children aged under 12 are forced to work in South Asia.

India’s coronavirus lockdown is thought to have pushed more children into working after their parents fell into poverty, experts say. — AFP