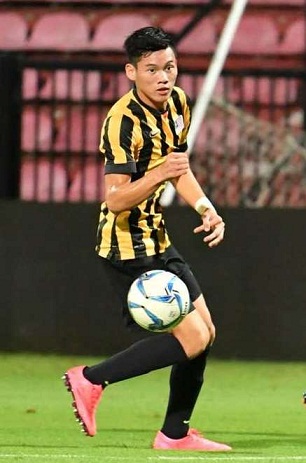 Gerald believed the experience would help greatly in his development to become a better footballer.

“I’ve been training with the senior team since early February and I think it is good for my career.

“I will be able to learn from the seniors and the experience gained while sharing the field with the senior footballers will surely help me to improve in the game,” he said when contacted here today.

For the record, Gerald is one of the eight President Cup (under-22) junior players who signed contracts with Sabah FA and they are currently training with the state senior squad.

“The aim is to give my best and help the President Cup team in the 2021 campaign and of course with the senior team if my service is needed.

“I’m eager to return to the field to play football and hopefully the 2021 season will take place as scheduled and will not be cancelled due to the pandemic,” added Gerald.

The President Cup challenge is expected to start in June.

Gerald went on to say that he is also hopeful to play his part in the 20th Malaysia
Games (Sukma) in Johor, which has been postponed to 2022.

“I want to help the Sabah Sukma squad. However, it is still unclear at the moment because there is still no announcement on the age limit for the games.

“Sukma is traditionally an under-21 competition and I’m 22-year-old already. If the Johor Sukma is switched to an under-23 tournament and I’m selected, I will certainly give my best,” said Gerald who is a member of the 2018 squad that won bronze in the Perak Sukma.

Meanwhile, Gerald has not lost hope of returning to the national junior team set up.

The Tenom lad was in the national under-19 squad that emerged as champions in the Asean Football Federation U-19 Championship in Indonesia in 2018.

He was the first choice right back until a knee injury cut short his involvement in the championship, missing the semifinal and final matches.

“It is my dream to play for the national team, including at senior level, but first I have to prove that I’m up for it.

“However, the main focus for now is to get into shape and improve to help the state teams,” he said.