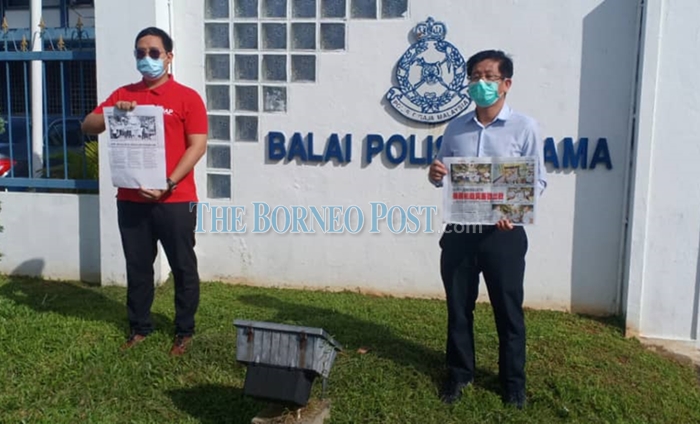 Urging the Election Commission to also take action against the party, Tan and Dapsy Kuching chairman, Anthony Chin, told reporters outside the Sekama police station that SUPP Kuching had used what resembled ‘ballot papers’ in their public engagements.

“In the photo (referring to newspaper articles), we can see that they also handed out posters of what looked like ballot papers.

“This is possibly an offence under Article 3 (1) of the Election Offences Act 1954, therefore we urge EC to investigate this matter and to act on it fairly,” said Tan, adding that SUPP had also introduced two possible Gabungan Parti Sarawak (GPS) candidates for the Padungan state seat in the news reports.

“We can even see that they stuck the ‘ballot paper’ onto a wall of an eatery outlet here, this is clearly overdoing it.”

The Article, among others, prohibits the printing of “…any advertisement, handbill, placard or poster which refers to an election and contains a reproduction of a ballot paper, or of what purports to be a ballot paper, to be used or likely to be used at such election…”

Meanwhile, Tan urged SUPP to think of a safer way to distribute the Kenyalang Gold Card (KGC) to recipients in their area, especially for senior citizens, due to the Covid-19 pandemic.

“We know that during this pandemic time, the old people are vulnerable. They should think of a better way to distribute the KGC instead of asking them of making them go to a counter for collection.

“In fact, what SUPP can do is to make a phone call to the old folks and send the KGC to their postal address. Even a credit card can be sent to the postal address,” he said.