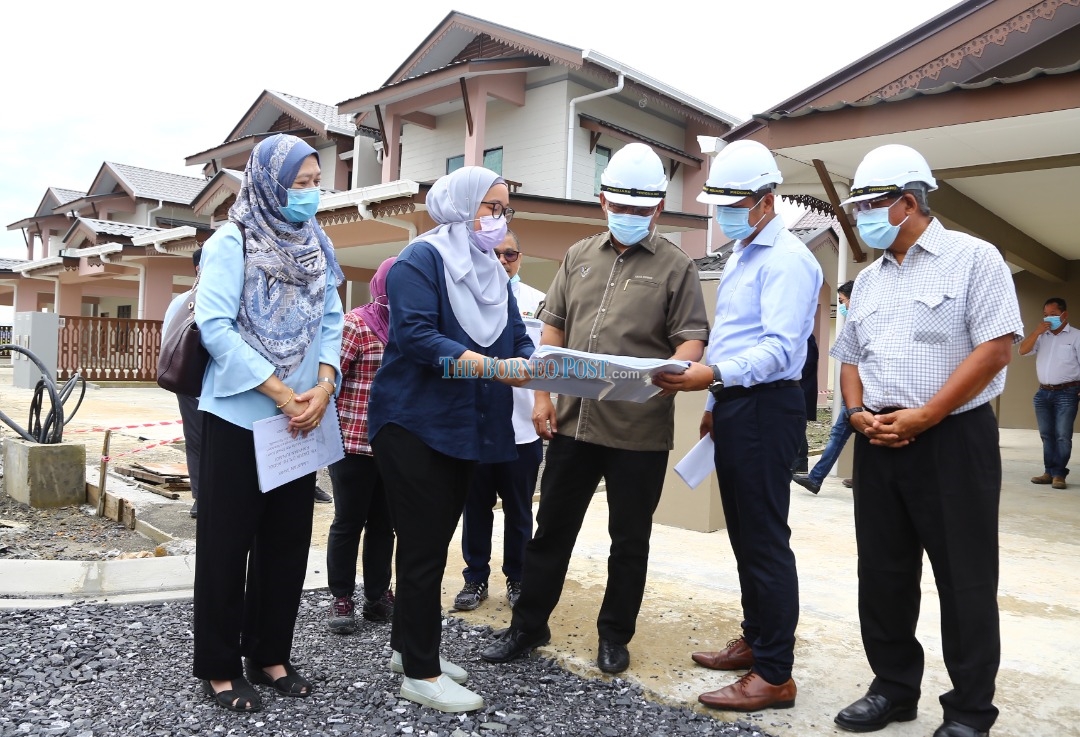 KUCHING: A total of 564 households from Seberang Hilir will be moving to the Darul Hana Housing Project area as early as December this year for the first phase, said Assistant Utilities Minister Datuk Dr Abdul Rahman Junaidi.

He said the households, comprising residents from Kampung Panglima Seman Lama, Kampung Semarang and Kampung Pulo Ulu, will start moving into Block 2a between late December this year or early January 2021, and into Block 1a within three to four months after that.

“The almost-completed houses located in Block 1a and Block 2a consists of various designs, such as semi-detached houses, bungalows and terrace houses.

“The first round will move into the fully completed 78 houses in Block 2a as early as December this year or early January next year, while the rest into Block 1a will move in within three to four months time,” he said after a site visit at the Darul Hana Housing Project this morning.

“The moving process would be between six to eight months, and logistical cost will be borne by the state government and implemented by the Land and Survey Department,” he added.

He explained that each household will be allocated houses according to the value of their old property, ranging from RM98,000 single-storey terrace house to RM300,000 double-storey bungalows.

The state-funded RM200 million Darul Hana Housing Project was initiated in December 2017 with the aim of relocating villagers from 13 villages in Seberang Hilir to make way for further Kuching City development.

The Darul Hana Housing development will be the first in Sarawak to implement Smart Township concept complete with 5G and high speed Internet facilities.

The relocation programme will be done in phases until 2030 and involves some 2,600 households from all 13 villages in Seberang Hilir.

Dr Abdul Rahman said because Darul Hana will be the first Smart Township in the state, each home would be equipped with Smart Metering system for their utilities including electricity and water, which could be accessed through their smartphones online.

“Homeowners with this Smart Metering System would be able to monitor their utility usage, pay online and even turn on or off their utilities through their smartphones.

“Also in the near future, Darul Hana will also be the first to implement the Single Billing System which will eventually be implemented statewide. This means homeowners will only receive a single bill for all their utilities which will include electricity, water, Internet and gas,” he said.

“Issues faced by Seberang Hilir such as lack of public recreational facilities, narrow roads, lack of proper drainage system and such will not be a problem anymore in Darul Hana.

“Darul Hana will also have shophouses and an underpass connecting the North and South crossing Jalan Tun Salahuddin,” he said.

Asked if the legacy names of the 13 Seberang Hilir villages will also be adopted to the Darul Hana Housing area, Dr Abdul Rahman said one of the proposals by villagers was to divide Darul Hana into six precincts, which would adopt the names of some of the villages in Seberang Hilir.

The names of villages proposed by Seberang Hilir villagers to be adopted by the proposed precincts are Boyan, Gersik, Sourabaya, Panglima Seman, Semarang, Pulo and Bintawa, he said.

To sum things up, Dr Abdul Rahman said, the reception of Seberang Hilir villagers to the Darul Hana Housing project and the relocation programme has been very positive, with only about 5 per cent still opposing it.

He said he will personally meet with the 5 per cent to further explain to them the benefits of the Darul Hana Housing and relocation programme on his own initiative.

“I will ask the Penghulus to interact with them and I will answer all their doubts.

“But in general the reception of the villagers have been very positive, many of them could not wait to move here. This project is important because this is a turnkey project for other housing developments in the state,” he said.