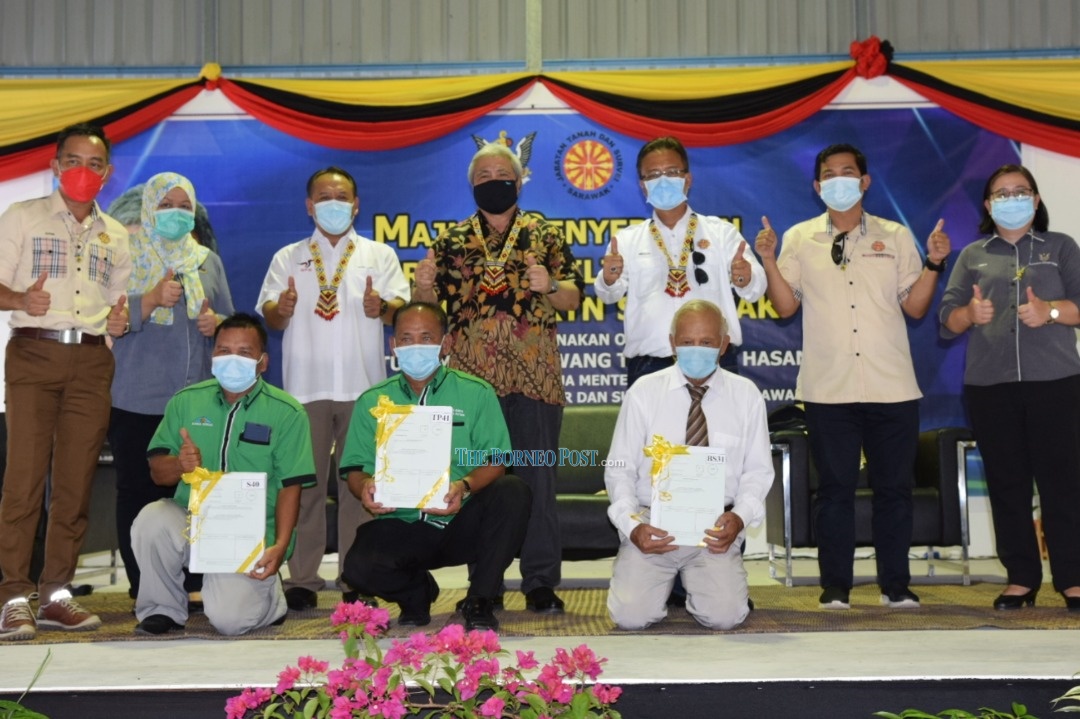 Awang Tengah (centre) posing with some of the recipients together with Jinep (third left) and Abdullah (third right). – Photo by Roystein Emmor.

He said the state government would honour landowners and ensure their land would properly be perimeter-surveyed under Section 6, till the title granted to them under Section 18.

“If you don’t trust your land surveyed under Section 6, do return your titles back to the government. I have said it many times.

“But to date, nobody has returned their titles surveyed under Section 6. This proves that claims by certain quarters that Section 6 would allow the government to take away your land is false.

“It is just empty talks by certain quarters trying to deceive the people to earn some political points only,” he said during a land title handing over ceremony at Kampung Tanjong Poting at Jalan Singai here today.

Awang Tengah, who is also Urban Development and Resources Minister, said the state government had been carrying out perimeter surveys for landowners in the state since the 60s, and over a period of up until 2010, progress had been very slow.

“When the government implemented an initiative to intensify and expedite perimeter survey to NCR land, from 2010 till this year the state government through the Land and Survey Department managed to survey over 942,000 hectares of NCR land, and issued titles for over 750,000 hectares,” he said.

In fact, Awang Tengah added, the Gabungan Parti Sarawak (GPS) government had allocated RM40 million for this year alone for that initiative.

“Perimeter surveys will only be done based on applications by landowners. We will not force them.

“Before we initiate the surveys, we will conduct dialogues with them so that they will be clear about it, and the land boundaries are agreed upon amicably,” he said.