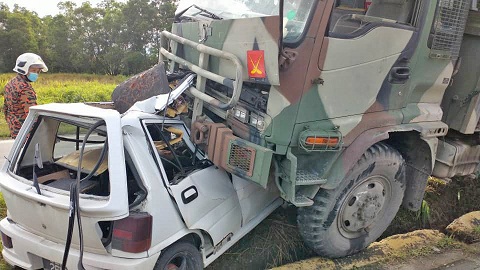 The army truck and Perodua Kancil at the scene of the collision near Marabahai Spurs junction at Berungis-Tenghilan road in Tuaran.

TUARAN: Three people, including a police corporal, were killed in a road accident involving an army truck, a Perodua Kancil and a Yamaha motorcycle near Marabahai Spurs junction at Berungis-Tenghilan road here, this morning.

The policeman has been identified as 45-year-old Shamsully Adly who was attached to the Kota Belud police contingent, while the other victims were cousins Jul Amri Shamsudin and IL Yasa Bin Samsudin, in their mid 20s and 30s.

Tuaran police chief DSP Mohd Hamizi Halim said Shamsully was driving the Perodua Kancil while both Amri and Yasa were on the motorcycle.

Mohd Hamizi said police investigation revealed the incident happened around 8am (Feb 6) when the motorcycle came out from a road junction into the lane where the army truck driven by a 24-year old personnel was heading for Tenghilan from Tamparuli. 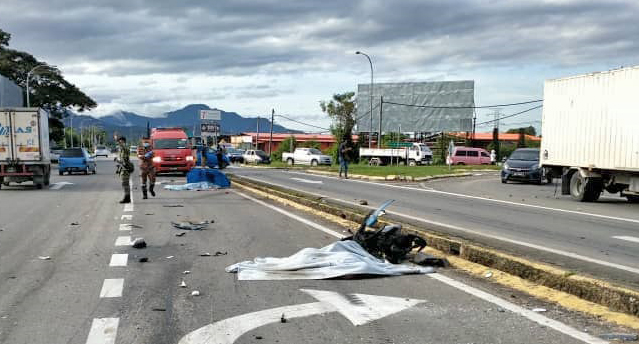 The motorcycle was dragged several meters away after colliding with a truck near Marabahai Spurs junction at Berungis-Tenghilan road in Tuaran.

The truck driver failed to avoid hitting the motorcycle and both riders were dragged several meters along with their machine.

“The truck driver then lost control of the wheel and collided with a Perodua Kancil, that was on the opposite lane, and dragged it to a road divider,” said Mohd Hamizi.

Both Amri and Yasa sustained severe head and body injuries and died at the scene while Shamsully succumbed to his injuries after being pinned in the driver’s seat of his Perodua Kancil.

Mohd Hamizi said the truck driver has been detained to facilitate investigation and the case is currently being investigated under Section 41(1) of the Road Transport Act 1987.