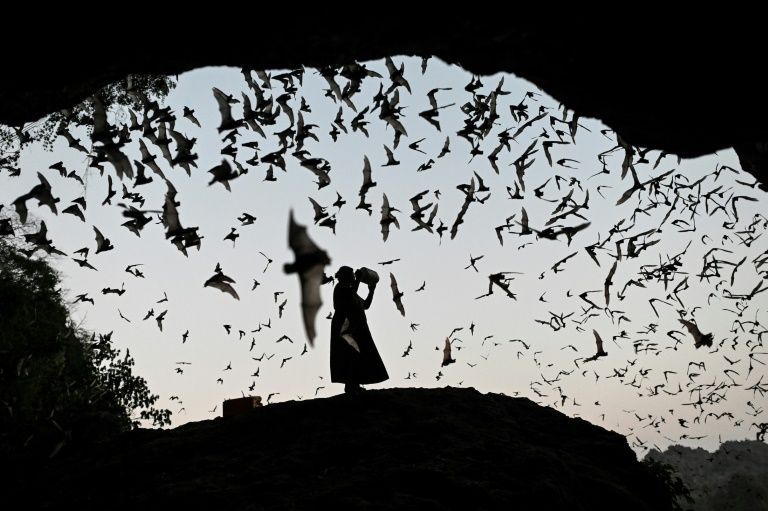 Over the last century, 40 species of bat have relocated to southern China, Laos and Myanmar — the area where genetic analysis suggests the virus known as SARS-CoV-2 first appeared. AFP Photo

Climate change may have played a “key role” in the transmission of the novel coronavirus to humans by driving several species of pathogen-carrying bats into closer contact, research showed on Friday.

The virus, which has killed more than two million people and caused unprecedented global disruption, is thought to have originated in bats in Southeast Asia.

Researchers from the University of Cambridge used temperature and rainfall data over the last 100 years to model populations of dozens of bat species based on their habitat requirements.

They found that over the last century, 40 species had relocated to southern China, Laos and Myanmar — the area where genetic analysis suggests the virus known as SARS-CoV-2 first appeared.

Since each bat species carries an average of 2.7 coronaviruses, the researchers said 100 strains of coronavirus were now concentrated in this “hotspot” area.

“Our paper is a long way away from saying the pandemic would not have happened without climate change,” lead author Robert Meyer of Cambridge’s zoology department told AFP.

“But I find it difficult to see that this climate-driven increase in bats and bat-borne coronaviruses make something like this less likely to happen.”

While the precise chain of SARS-CoV-2 transmission from animals to humans is yet to be determined, Beyer said the changing climate and habitat destruction in Asia had driven virus-carrying species into ever closer contact with human populations.

“It’s two sides of a similar coin: we penetrate deeper into their habitat but at the same time climate change can have the effect that it pushes the pathogen in our direction,” he said.

The study, published in the journal Science of the Total Environment, urged governments to take measures including limiting urban expansion and farming, which it said would help to manage the risk of another pandemic of a disease endemic in wild animals.

It also called for greater effort to mitigate climate change to avoid large accumulations of wild species near human habitation.

“The fact that climate change can accelerate the transmission of wildlife pathogens to humans should be an urgent wake-up call to reduce global emissions,” said Camilo Mora at the University of Hawaii, who contributed to the research.

Kate Jones, Professor of Ecology and Biodiversity at University College London, said Friday’s research was interesting but that the pandemic was a result of a variety of factors.

“Climate change certainly has a role to play in changing species distributions to increase ecological hazard,” said Jones, who was not involved in the study.

“However, spillover risk is a complex interplay of not only ecological hazard but human exposure and vulnerability.”

Habitat loss, for example, has also been a major driver in pushing wild animal species closer to human populations. — AFP