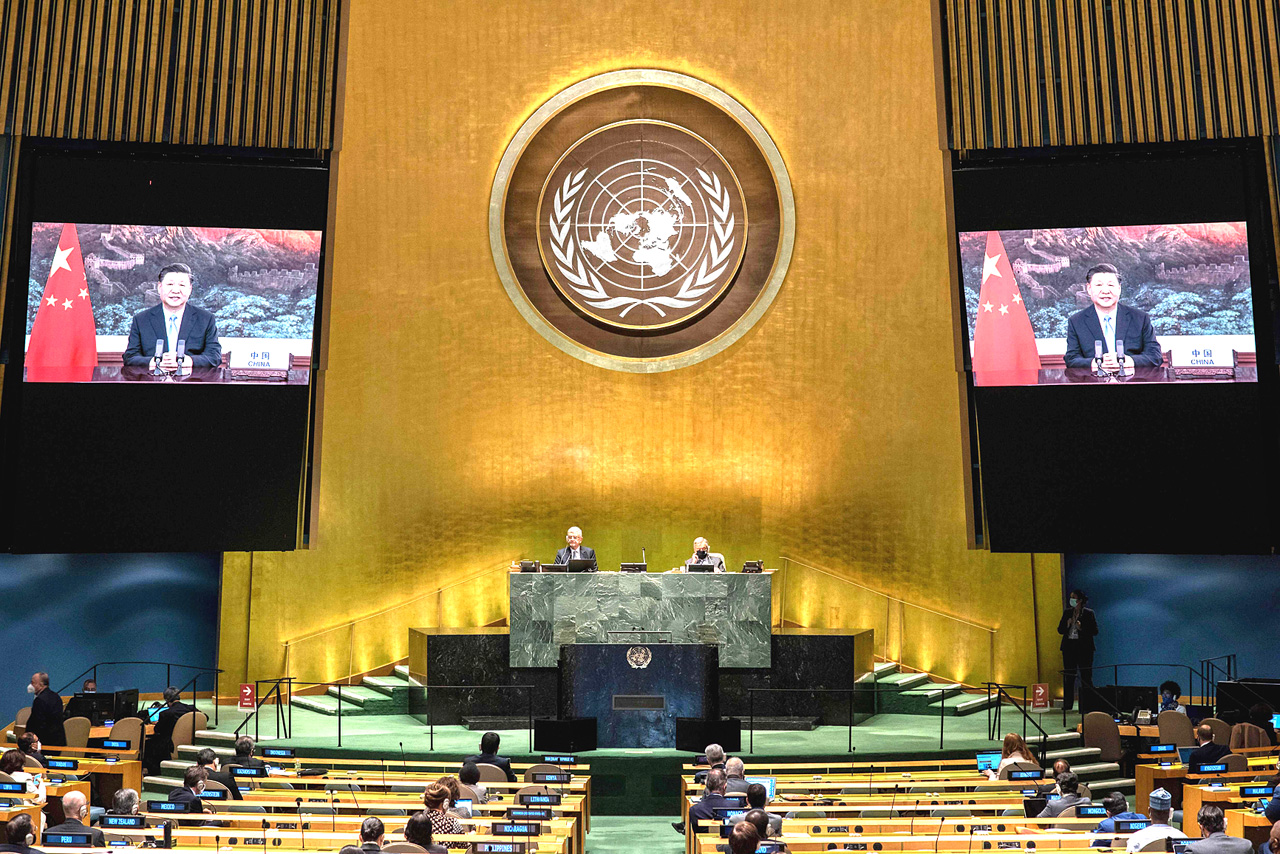 Xi (on screen) as he addresses the general debate of the seventy-fifth session of the United Nations General Assembly at the UN in New York. — AFP photo

UNITED NATIONS, US: Chinese President Xi Jinping moved to seize the climate agenda from the US, vowing that the world’s largest polluter will go carbon neutral by 2060, a target hailed by environmental activists as a major stride forward.

The goals, which included a pledge to reach peak emissions in 2030, are the most concrete yet announced by China, which accounts for one quarter of the planet’s greenhouse gas emissions blamed for fast-rising temperatures.

Speaking to the United Nations (UN) General Assembly, Xi renewed his support for the Paris climate accord and called for a green focus as the world recovers from the Covid-19
crisis.

Under President Donald Trump the US — the world’s second largest polluter — has pulled out of the agreement, blaming China for the stalled momentum on tackling global emissions.

But in his speech, Xi set China out as a climate leader, saying the Paris accord “outlines the minimum steps to be taken to protect the Earth, our shared homeland, and all countries must take decisive steps to honor this agreement.”

“We aim to have C02 emissions peak before 2030 and achieve carbon neutrality before 2060,” he said in a virtual address.

Xi urged all nations to “seize the historic opportunities presented by the new round of scientific and technological revolution and industrial transformation.”

But China’s leader did not immediately put meat on the bones of his carbon-slashing commitment.

China currently has 135 gigawatts of coal-power capacity either permitted or under construction, according to Global Energy Monitor, a San Francisco-based environmental group.

That equates to about half the total coal-power capacity in the US.

The European Union (EU) had been pushing China to be more ambitious by moving the peak emissions date to 2025, arguing that the five year gap is crucial as the planet falls behind in fighting climate change.

The Paris climate deal commits nations to limit global temperature rises to ‘well below’ two degrees Celsius from pre-industrial levels through a rapid and sweeping drawdown of greenhouse gas emissions.

“All in all, China’s announcement is a defining moment that resets the ambition of global climate action,” he said.

The 2060 objective is still less ambitious than the 2050 date set by dozens of small states as well as European powers.

Several experts said it was still a significant step to bring new life to the Paris accords.

“This announcement will send positive shockwaves through diplomatic circles and should prompt greater climate ambition from other major emitters,” said Helen Mountford, vice president for climate and economics at the World Resources Institute in Washington.

But she cautioned that the ‘devil will be in the details’ and said that China should set more specific goals in the nearer term.

But he questioned whether China would follow its own guidelines as it pursues a global infrastructure-building binge — for example, if it will still back coal plants in Africa.

“If this coherence is lacking, the progress made in China could be lost due to additional emissions by Chinese-built or -funded fossil infrastructure in developing countries,” he said.

Xi’s tone contrasted sharply with that of Trump, who called the Paris accord negotiated by his predecessor Barack Obama unfair to the US.

Trump says he is standing up for US constituencies such as coal miners and has loosened environmental rules, although individual US states such as California have insisted on fighting climate change on their own.

“Those who attack America’s exceptional environmental record while ignoring
China’s rampant pollution are not interested in the environment,” Trump said in a UN speech shortly before Xi spoke.

“They only want to punish America, and I will not stand for it.”

China’s ambassador to the UN, Zhang Jun, scoffed at the remarks by Trump, who devoted much of his speech to attacking Beijing over Covid-19.

“The US should be the last one to talk about climate change,” he told reporters.

“They are the one who are disassociating itself from the international efforts on climate change.”

The future of the Paris accord will be partly determined on November 3 as Trump runs for re-election against Joe Biden, who has pledged to return the US to the agreement and move toward carbon neutrality by 2050. — AFP