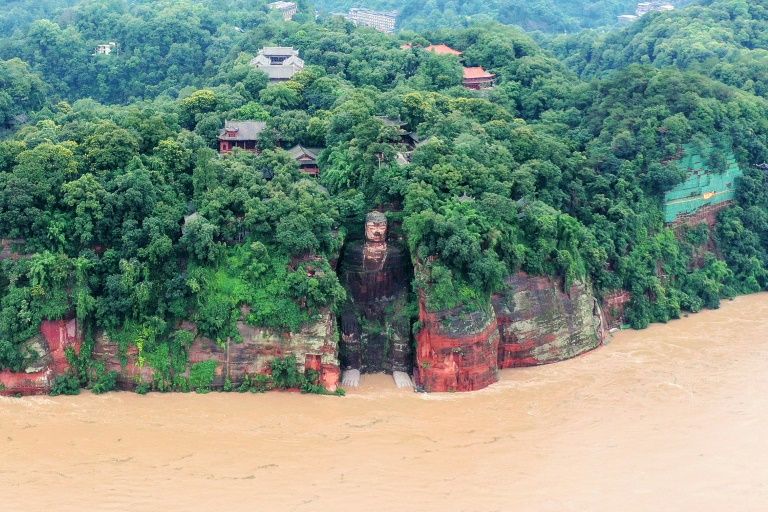 State media footage showed murky floodwaters lapping at the feet of the 71m metre-tall Leshan Giant Buddha in Sichuan – for the first time since the People’s Republic of China was founded in 1949. AFP Photo

Floods in mountainous southwest China have washed away roads and forced tens of thousands from their homes, with authorities warning Wednesday the giant Three Gorges Dam was facing the largest flood peak in its history.

Footage on state broadcaster CCTV showed murky water lapping at the feet of the Leshan Giant Buddha — a 71m-tall figure carved into a cliffside in Sichuan province.

CCTV said floods had not reached the Buddha’s feet since the People’s Republic of China was founded in 1949.

Video footage showed soldiers evacuating residents wearing lifejackets — many of them elderly — from Fengzhou county opposite the statue, helping them climb into a boat.

Around 1,020 people had been stranded in Fengzhou, suffering food and water shortages after floodwaters cut off road traffic, state news agency Xinhua said.

More than 100,000 people have been evacuated as the cities of Ya’an and Leshan were hit by floods, it added.

State media footage also showed tree trunks and lower branches submerged in water, and in one dramatic shot a small building collapsed into rushing floodwaters and was carried away.

Another UNESCO world heritage site, the Jiuzhaigou National Park, said it would temporarily close due to safety concerns.

Elsewhere in Sichuan, 21 vehicles fell into a large hole caused by a collapsed road early on Wednesday, although the state-run Global Times said there were no injuries.

Xinhua said floodwaters were expected to hit the downstream metropolis of Chongqing later this week. – AFP