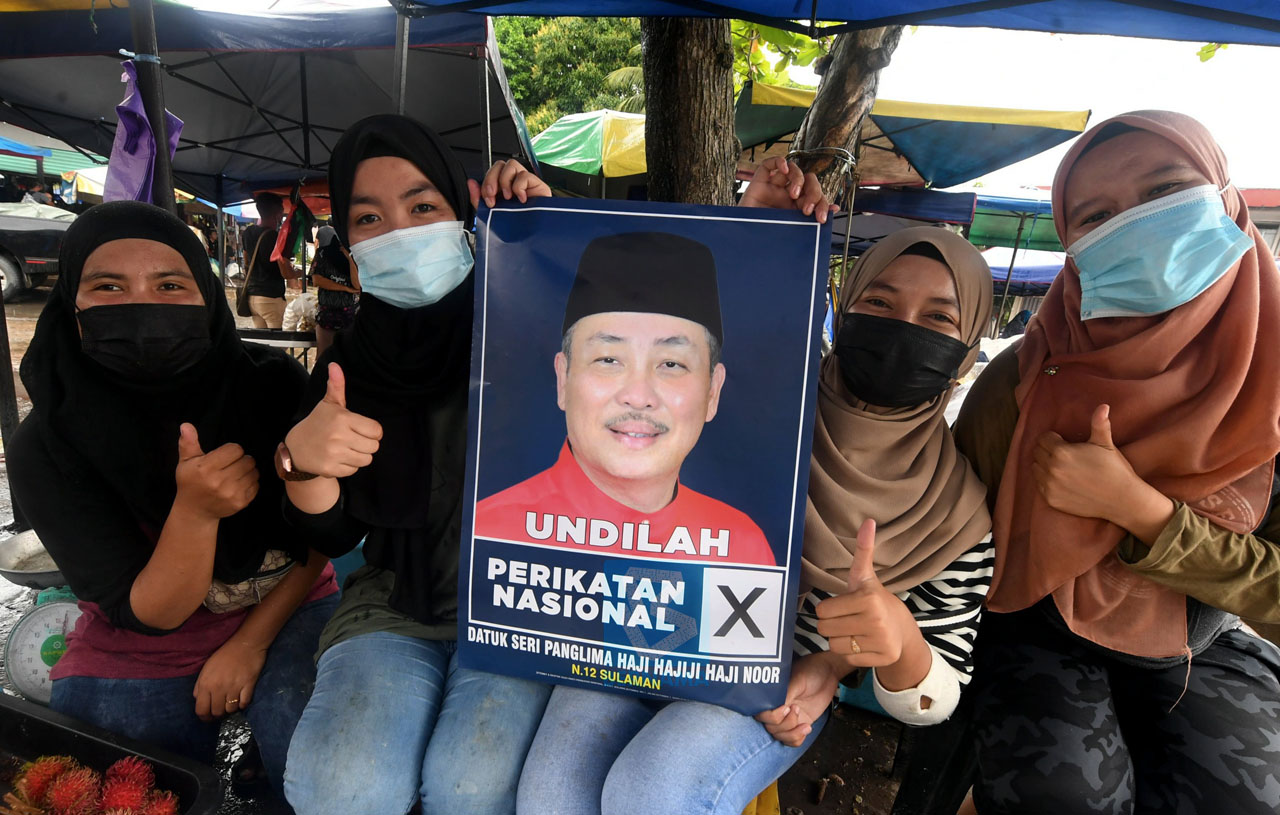 Residents of Kampung Mengkabung Tuaran (from left) Nor Hafiza Hassan, Nor Sainah Hussin, Sharlina Rocy and Rosalinda Abdullah give the thumbs-up in a photo with a poster of Berstau candidate Datuk Hajiji Mohd Noor. — Bernama photo

KOTA KINABALU: It is still anybody’s game in the 17 seats where Perikatan Nasional (PN) and its allies Barisan Nasional (BN) and Parti Bersatu Sabah (PBS) are crossing swords in the Sabah state election, said a political analyst.

Universiti Malaysia Sabah (UMS) senior lecturer Prof Dr Lee Kuok Tiung said this is because these seats involve multi-cornered fights which could have been staged with the mutual understanding of BN and its allies.

“If they were one-on-one fights and suddenly your alliance (member) tried to sabotage you, then that would be a problem.

“But this time, these are multi-cornered fights. You never know, it could be their strategy,” Lee told Bernama when contacted.

Most of the constituencies are located in the interior, central and northern Sabah and predominantly Kadazan-Dusun-Murut areas.

Lee ruled out misunderstanding and the obsession for power as the cause of the clashes, which many viewed as surprising given that the allies had held talks on seat distribution prior to the nomination of candidates on Saturday. He explained that not all seats saw overlaps between BN and its allies but only those they had agreed upon.

“For me, that is brilliant on the part of the leadership or else you wouldn’t be able to reach any consensus,” said Lee, who is from the UMS Social Science and Humanities Faculty.

Another analyst, Tony Paridi Bagang, felt that the clashes in 17 out of the 73 seats up for grabs were expected.

However, the Universiti Teknologi Mara (UiTM) Sabah senior lecturer (Government and Politics) said they occurred because the allies failed to reach consensus on seat allocation.

“Early indications surfaced when PBS decided to use its own logo in this election, sending message on its desire to field candidates in most of the constituencies.

“Furthermore, PBS is already out of BN and is not obliged to accede to the wishes of BN or PN. It can also be taken to mean that PN, BN and their ally were not too successful in their seat distribution negotiations,” said Bagang.

Nevertheless, Bagang viewed these clashes as “friendly contests” among parties which have forged cooperation to form the government.

Local political writer and analyst Musli Oli said challenges faced by the leadership of the coalition at the state level in managing Sabah politics had resulted in these clashes. Musli also felt that the creation of 13 new seats for this election had contributed to the jostling for seats among the allies and complicated the distribution of seats. — Bernama