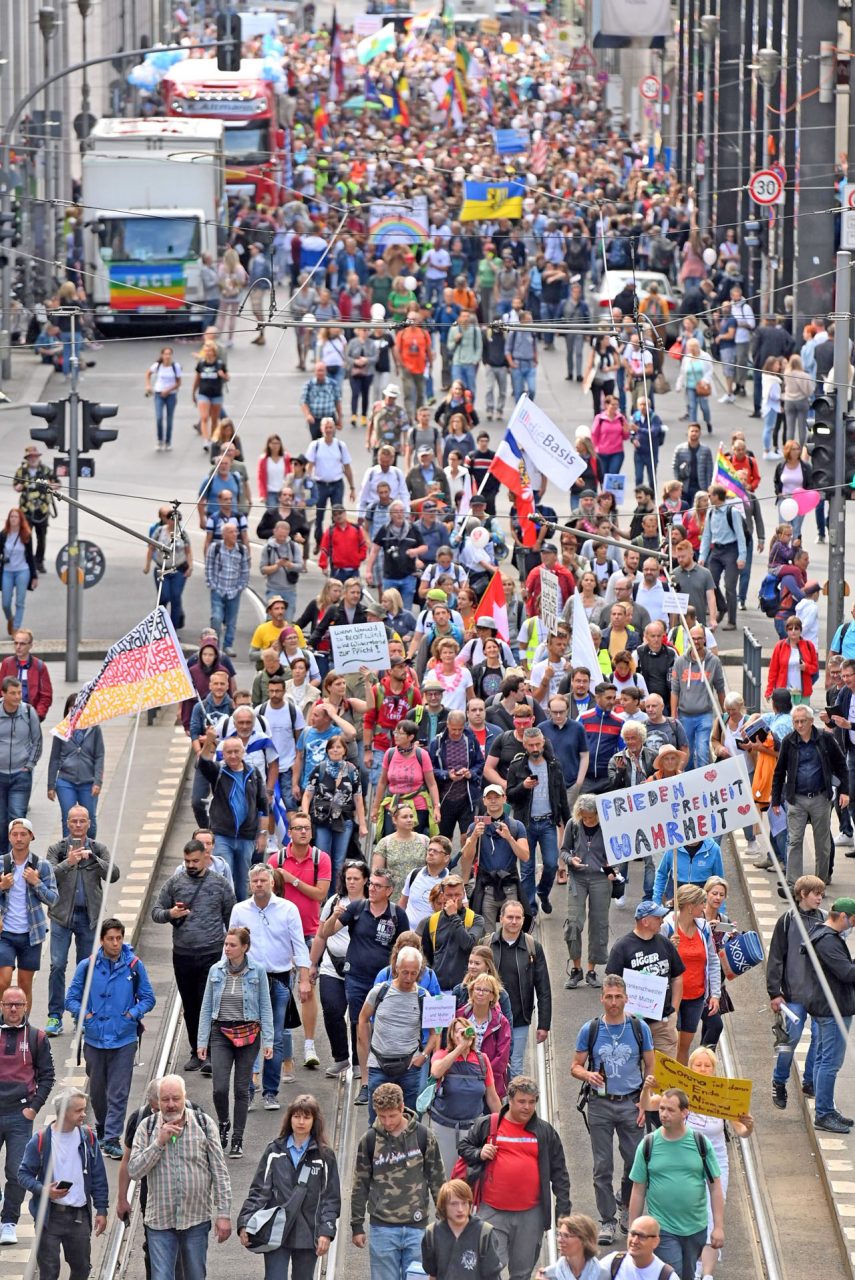 People take part in a demonstration called by far-right and Covid-19 deniers to protest against restrictions related to the new coronavirus pandemic in Berlin. — AFP photo

BERLIN: Thousands of coronavirus sceptics are set to descend on Berlin Saturday for a mass protest against pandemic restrictions that was allowed to go ahead after a bitter legal battle.

Police said they will turn out in force and strictly monitor compliance with mask-wearing and social distancing, with Berlin police chief Barbara Slowik warning that if the demonstrators do not adhere to virus safety rules, police will clear the area “very quickly”.

“We will not be able or willing to watch tens of thousands assemble and create infection risks,” she added.

Berlin city authorities had previously decided not to allow yesterday’s demonstration to go ahead, fearing that the estimated 22,000 protesters would not keep a distance of 1.5 metres apart or comply with face mask requirements.

The ban sparked outrage from organisers and their supporters who flooded social media with angry messages vowing to protest anyway, with some even calling for violence.

But on the eve of the demo, Berlin’s administrative court sided with the demonstrators, saying there was no indication that organisers would “deliberately ignore” social distancing rules and endanger public health.

A crowd including families with children gathered yesterday morning around Brandenburg Gate, the starting point of the demonstration.

“I’m not an extreme right-wing sympathiser, I’m here to defend our fundamental freedoms,” said Stefan, a 43-year-old Berlin resident with a shaved head and a T-shirt with the words ‘Thinking helps’ written in large print.

“We’re here to say: we have to be careful! Coronavirus crisis or not, we must defend our freedoms,” Christina Holz, a 22-year-old student, told AFP.

Around 3,000 police officers, including 1,000 federal police, would be deployed for the demonstration, alongside specialist equipment including water cannon, Slowik said.

The rally comes as coronavirus cases continue to rise in Germany, with daily new infection numbers reaching highs not seen since April.

At a press conference on Friday, Chancellor Angel Merkel said confronting the virus will become more challenging in the coming autumn and winter months.

Merkel and the leaders of Germany’s 16 federal states on Thursday introduced tougher coronavirus restrictions to curb the pandemic, including a minimum 50 euro (US$59) fine for people caught not wearing face masks where one is compulsory.

“We will have to live with this virus for a long time to come. It is still serious. Please continue to take it seriously,” Merkel warned.

The court decision to allow the protest shines a light on the battle lines being drawn up between those who are content to follow government-mandated protection measures and those who believe that governments shouldn’t be able to dictate how people live. — AFP