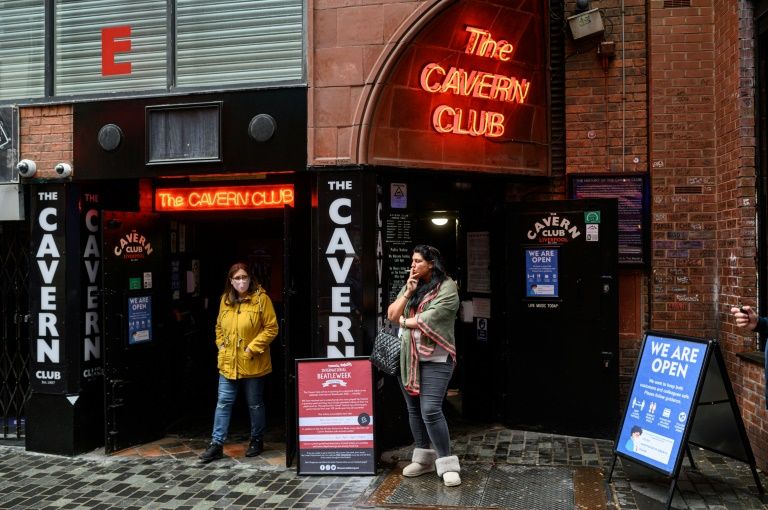 The Cavern Club, a Liverpool landmark synonymous with The Beatles, has reopened to the public. AFP Photo

Liverpool’s Cavern Club, where The Beatles learnt their trade, has hosted its first gig since it was forced to close due to the coronavirus outbreak.

“It’s just great to be back,” said Peter Naylor, a superfan of the Fab Four, as the city centre venue reopened its doors on Thursday.

“Such an iconic club, such great music. We missed it, missed coming down here,” he told AFP.

Billed as “the most famous club in the world” and the “cradle of British pop music”, the Cavern shut its doors in late March as the coronavirus pandemic took hold in Britain.

Its reopening coincided with the first day of the seven-day annual International Beatleweek festival, which celebrates the music of the biggest pop band in history.

Most events have been cancelled this year due to restrictions on audience numbers, but the cramped underground venue is hosting gigs and live-streaming them to fans across the globe.

Events held across the northwest English city coincide with the 50th year since the band broke up.

“It does feel a little bit like a cabaret club rather than the hot and sweaty Cavern which we’re used to,” said club director Bill Heckle.

“But it’s just nice to be back and seeing happy smiling faces and the musicians play such amazing music once again.”

Performer Paul Jones said it was “an honour” and “privilege” to kick off the show.

“I can’t tell you the feeling to finally be able to open our doors again to the public, to all these Beatles fans who want to come in and celebrate what they should be celebrating, which is live music in such a historic venue,” he said.

“It’s not quite the live, hot and sweaty, everybody dancing atmosphere that we’re used to, but it’s a massive step in the right direction.”

Like many entertainment venues across the country, the club on Mathew Street has been hit hard by the pandemic, with tourists making up a large proportion of its audience.

Although its famous red brick walls are once more echoing to the sound of music, only 150 people are allowed into the 500-capacity venue.

In all, The Beatles — John Lennon, Paul McCartney, George Harrison and Ringo Starr — played the club 274 times, between February 1961 and August 1963.

They were initially paid £5 — the equivalent of just under £100 today — rising to £300 shortly before they rocketed to stardom on the global stage. — AFP