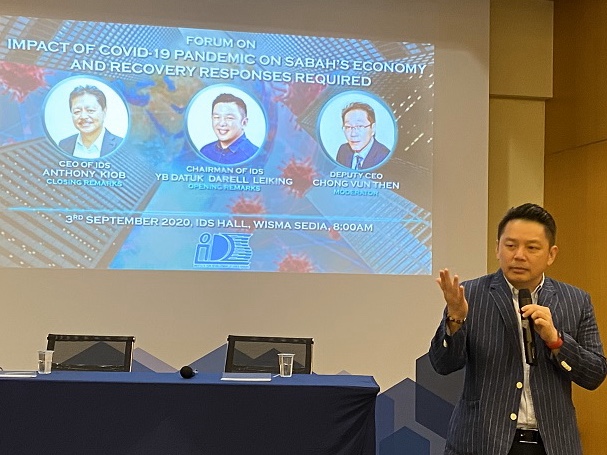 Darell speaking at the IDS forum on the impact of Covid-19 on the state’s economy at Wisma Sedia yesterday.

KOTA KINABALU: Sabahans should be more confident of themselves when looking for job opportunities instead of playing the blame game on the illegal immigrants issue, said Penampang Member of Parliament Darell Leiking.

Based on a research by the Institute of Development Studies (IDS), he disclosed that 72 per cent of the youths in Penampang are currently unhappy with their ‘wakil rakyat’ for failing to send back the illegal immigrants, which resulted in them losing job opportunities.

However, the Parti Warisan Sabah (Warisan) deputy president opined that the illegal immigrants working in the state are mostly working as hard labourers, a sector which most locals would not usually go into.

“I’m wondering who does the ‘tukang’ work – the hard labour work? Are they locals?” said Darell in his speech during the IDS forum on the impact of Covid-19 on the state’s economy, here at Wisma Sedia on Thursday.

He said that even in the UK, it’s not the English who would do the hard labour jobs; it’s the foreigners such as the Czechs and the Romanians.

In this regard, Darell urged Sabahans to look at the bigger picture and to upscale themselves.

“If you still think the PTIs are taking over your jobs, then you’re in serious trouble because you have no confidence in yourself,” he added.

Darell further revealed that the Federal Government had been sending the illegal immigrants home on a monthly basis.

He also said that there is a need for the government to take tougher actions in resolving the illegal immigrants issue.

“As long as we don’t document the illegal immigrants, we wouldn’t know who they are. We have to admit that we have to be a little bit tough. Despite all the criticisms, we still need to document these guys.

“We will not make them citizens but we have to document them,” he stressed.

The speech given by Darell was his maiden speech as the newly-appointed chairman of IDS.

Among those present at the event were IDS chief executive office Anthony Kiob and his deputy Chong Vun Then.