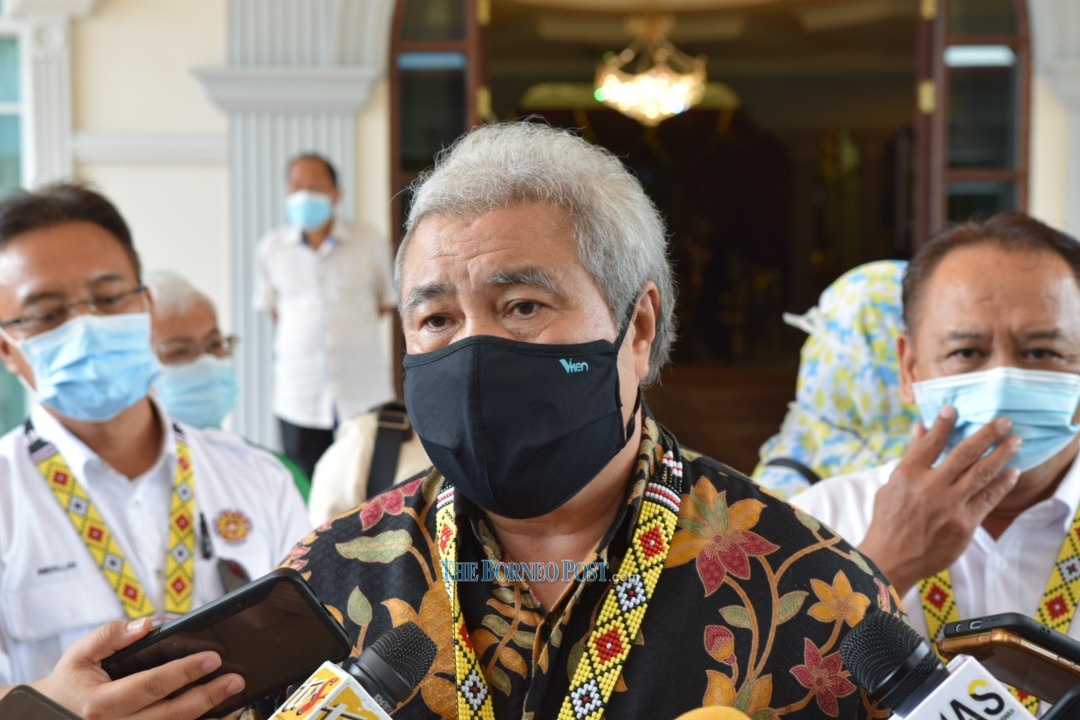 Awang Tengah speaking to reporters after handing over land titles to landowners in Kampung Tanjong Poting at Jalan Singai, Bau.

BAU: Deputy Chief Minister Datuk Amar Awang Tengah Ali Hasan has told the naysayers from certain quarters on the RM2.95 billion payment of State Sales Tax (SST) from Petroliam Nasional Berhad (Petronas) to Sarawak for 2019 to look at themselves in the mirror.

He said that certain quarters, particularly Pakatan Harapan (PH) leaders, who were with the federal government for 22 months since they took over in 2018, had not materialised a single promise they made to Sarawak regarding its oil and gas rights.

Among them, he said, was a promise by Sarawak Democratic Action Party (DAP) for Petronas to pay 20 per cent oil and gas royalty to Sarawak when they become the government.

Other than that, Awang Tengah said they even promised 50 per cent of tax collected from Sarawak to be returned to Sarawak.

“Last time they promised, like DAP, 20 per cent (oil and gas) royalty to Sarawak, and 50 per cent of tax collected from Sarawak to be given back to Sarawak. Where is the promise?

“Now Petronas paid more than RM2.9 billion, so what are they talking about? What had they promised (to implement) when they were in the government?

“Don’t just talk only. Look at yourself in the mirror,” he said.

Awang Tengah added that the payment of RM2.95 billion by Petronas showed that the federal government recognised Sarawak’s rights.

“When the Sarawak government received the payment from Petronas recently, that clearly shows the Federal Government recognises and respects the State’s rights.

“Does this means they (certain quarters) disagree with the SST payment made recently?” he said after officiating at a land title presentation ceremony at Kampung Tanjong Poting, Jalan Singai here this morning.

Awang Tengah was asked to react to statements from various members from certain quarters who claimed that Sarawak took the short end of the stick when it accepted the RM2.95 billion payment of SST from Petronas.

Among them were DAP Sarawak chairman Chong Chieng Jen who regarded it as “a trade-off” for the state’s rights over its oil and gas by surrendering the state’s oil and gas rights to the federal government.

“This is the second time that the current GPS (Gabungan Parti Sarawak) or the previous BN (Barisan Nasional) reaffirmed the validity of the Petroleum Development Act (PDA) 1974, which took away Sarawak’s oil and gas rights in return for a fraction of its value and worth.

“The first time the Sarawak government surrendered Sarawak’s oil and gas rights to the federal government happened in 1974 when the PDA 1974 was tabled and passed in Parliament,” Chong said in a statement on Friday.

Meanwhile, Batu Lintang assemblyman See Chee How yesterday said the state government should continue to make it a top priority to demand for the federal government and Petronas to admit and accept Sarawak’s legal ownership to oil and gas and generally the petroleum resources within Sarawak’s territory in the ensuing negotiations with Petronas.

“I must congratulate the Chief Minister (Datuk Patinggi Abang Johari Tun Openg) and the state government for procurement of the sum of RM2,956,671,407.36 from Petronas through the imposition of the SST.

“Together with the other petroleum conglomerates, Sarawak’s sales revenue from petroleum and petroleum products would have been in excess of RM61 billion in that year,” he said in a press statement.

Sarawak People’s Aspiration Party (Aspirasi) president Lina Soo meanwhile opined that Sarawak should impose 25 per cent SST on its oil and gas as five per cent is too little because Sarawak is the landowner and has ownership and economic rights over all its resources, as enshrined in Malaysia Agreement 1963 (MA63), Sarawak Constitution and Federal Constitution.

“If Petronas feels that 25 per cent is untenable, then Petronas should just pay five per cent PITA to the federal government and 25 per cent SST to Sarawak,” she said yesterday.