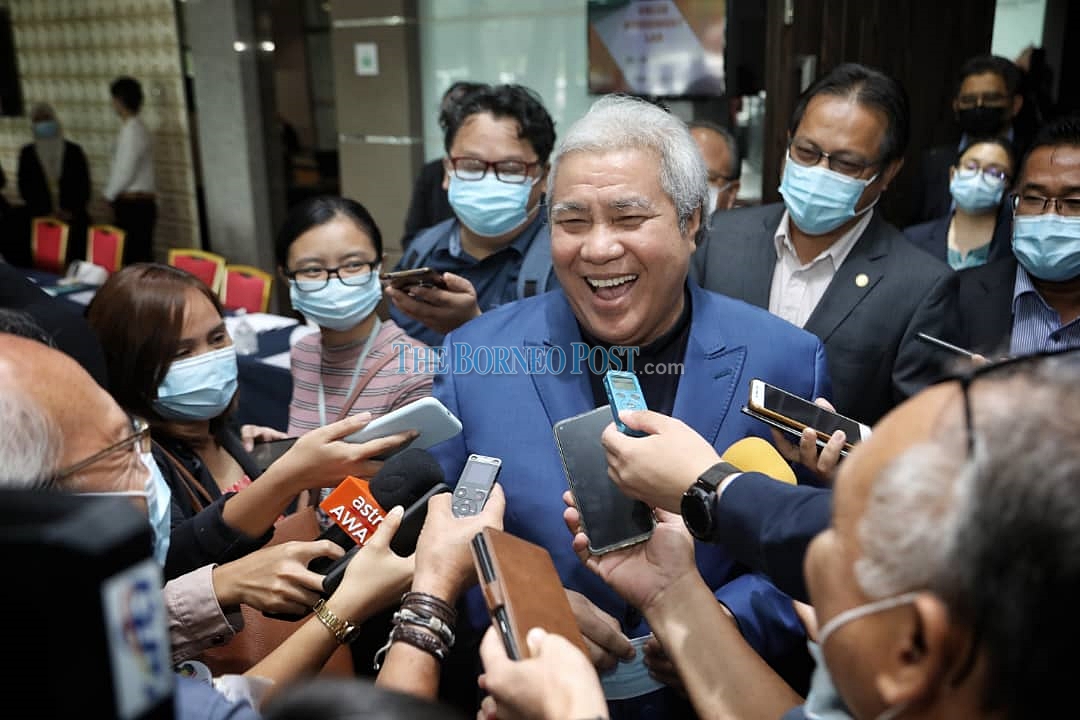 Awang Tengah shares a light moment with newsmen as he fields questions at the event. Photo by Chimon Upon

KUCHING (Sept 25): Sarawak plans to build another road from Miri to Limbang and Lawas, to be called the Sarawak Link Road, which is going to be shorter in distance compared to the proposed Sarawak – Sabah Link Road (SSLR) to be built by the federal government.

Awang Tengah, who is also Second Minister for Urban Development and Natural Resources, however did not reveal the length for the Sarawak Link Road.

“We will make some adjustments in terms of alignment from the proposed SSLR alignment to make the road shorter.

“As for the cost, we have not come to that yet,” he told reporters after officiating at the closing of a two-day Northern Coastal Highway Value Assessment Lab today.

He also said the Sarawak Link Road will the catalyst to develop hinterland and rural parts of Limbang and Lawas, apart from complimenting the coastal highway development.

“It will be from Miri to Mulu, and then connect to Limbang from Gunung Buda where a road is already under construction. And then from there to Lawas where part of the road are already there.

“(Followed by) Lawas to Semadoh, Ba Kelalan and in the future we also plan to connect it to Bario,” he said.

He said in his speech that the Northern Coastal Highway, which will be built by Sarawak with Regional Corridor Development Authority (Recoda) as the implementing agency, will be integrated with the Sarawak Link Road.

“The Highland Development Agency (HDA) which is also under Recoda is in the planning stage now to implement the road project to connect Miri to Mulu.

“And we have looked into the alignment and we have decided to have this Sarawak Link Road which is shorter in terms of distance compared to the proposed Sarawak – Sabah Link Road.

“So we will make adjustments in terms of alignment and this is going to be integrated with the proposed Northern Coastal Highway,” he said.

He also said China is a good example whereby focus on infrastructure development projects was key, now that the country was the second biggest economy in the world.

The SSLR project was initiated under the previous Pakatan Harapan (PH) federal government, and scheduled for completion by 2030.

The 425-km long project, slated as the first land route connecting Sabah and Sarawak without going through Brunei, was launched by Selangau MP Baru Bian in November 2019 when he was the Works Minister under the Pakatan Harapan government.

On Aug 3 this year, current Works Minister Dato Sri Fadillah Yusof had told the Dewan Rakyat that the present federal government is set to continue with the SSLR project comprising Phase 1 from Lawas to Kampung Pa’ Berunut and Phase 2 from Kampung Pa’ Berunut to Long Lama.

Fadillah, who is also Senior Minister for Infrastructure Development, said a letter of intent had been issued to the contractor on July 7, while the Letter of Acceptance will be issued when the contractor meets the conditions set out in the tender documentation.