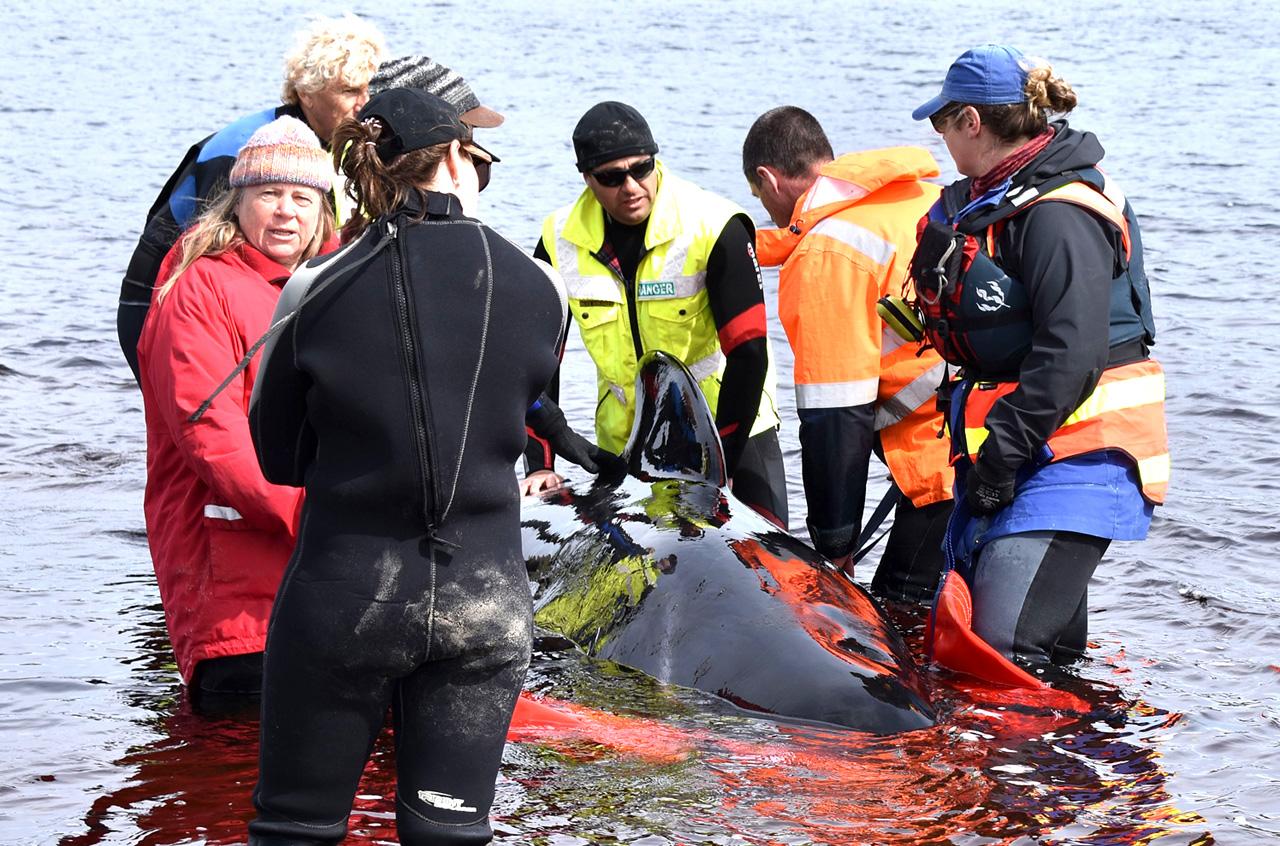 Rescuers work to save a whale stranded on a sandbar in Macquarie Harbour on the rugged west coast of Tasmania. — AFP photo

MACQUARIE HARBOUR, Australia: Australian rescuers were forced yesterday to begin euthanising some surviving whales from a mass stranding that has already killed 380 members of the giant pod.

While 88 pilot whales have been saved since the pod was discovered beached on Tasmania’s rugged western seaboard four days ago, the death toll is expected to rise as the window for rescue closes.

“We still have a few more live animals that we think are going to be viable to move,” said Tasmania’s Parks and Wildlife Service manager Nic Deka, praising the hard ‘yakka’ (work) of rescuers who will continue until nightfall and into today.

“There is a likelihood that we’ll be continuing the rescue effort tomorrow… our focus has been on those that appear the most viable and have the most chance of success,” he said.

A crew of around 60 conservationists and expert volunteers have spent days wading in the chilly waters of Macquarie Harbour, surrounded by the anguishing cries of dying whales.

“There are animals swimming around, they are vocalising. We can see the bonds and the pairings within them.”

Pilot whales — which can grow up to six metres long and weigh a tonne — are highly social.

Some animals have resisted rescue or tried to return to the pod after being freed, becoming beached for a second time.

Such is the level of distress that authorities said they had to carry out mercy killings of at least four whales.

“We’ve got a few others that we currently giving veterinary assessment.”

“That’s based purely on animal welfare grounds,” he said.

The crews are now focusing efforts on a group of 20-25 partially submerged whales, using boats fitted with special slings to guide them back to the open ocean.

A resident and cruise-boat worker who gave her name only as Monique said the local community has been devastated by witnessing scenes of such anguish.

“You could see that they were obviously suffering,” she told AFP.

“On the beach they were still… puffing, flipping about and you couldn’t really do much to help them.”

The causes of mass strandings remain unknown despite scientists studying the phenomenon for decades. — AFP