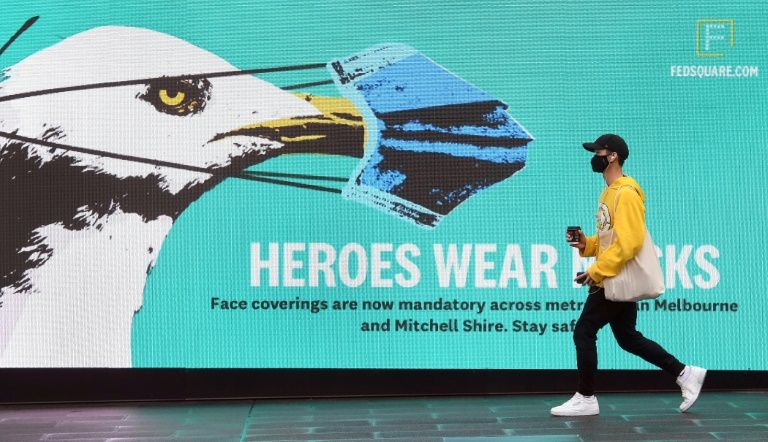 A man walks past a sign urging people to wear face masks in Melbourne as the city battles an outbreak of coronavirus. AFP Photo

Australia has secured access to a “promising” potential coronavirus vaccine, the prime minister announced Tuesday, saying the country would manufacture it and offer free doses to the entire population.

Prime Minister Scott Morrison said Australia had reached a deal with Swedish-British pharmaceutical company AstraZeneca to receive the COVID-19 vaccine it is developing with Oxford University.

“The Oxford vaccine is one of the most advanced and promising in the world, and under this deal we have secured early access for every Australian,” he said.

“If this vaccine proves successful we will manufacture and supply vaccines straight away under our own steam and make it free for 25 million Australians.”

The Oxford vaccine is one of five globally in Phase 3 efficacy trials, and researchers hope to have results by the end of the year.

It is the first such deal for Australia, and Morrison said his government was also in talks with “many parties around the world” over other potential vaccines as well as supporting local scientists in their efforts.

The country is yet to reach a final agreement with AstraZeneca on the cost, and a local manufacturer has not been locked in.

However, Australia has signed an Aus$25 million ($18 million) agreement with American medical technology company Becton Dickinson to buy 100 million needles and syringes to administer the doses.

Although none of the coronavirus vaccines under development has proved its efficacy yet in clinical trials, at least 5.7 billion doses have been pre-ordered around the world.

Five vaccines — three Western and two Chinese — are in Phase 3 efficacy trials involving thousands of people, including the Oxford vaccine.

AstraZeneca has also signed agreements to provide doses to the US, Europe and Brazil.

Another deal struck by Gavi, the Vaccine Alliance, would see India manufacture the Oxford vaccine for distribution in 57 low- and middle-income countries.

First shipments of a COVID-19 vaccine created by Western laboratories have often been snapped up by the United States.

Earlier this month he called on nations to share potential vaccines, saying any country that discovered one and did not make it available globally “would be judged terribly by history”.

Early in the pandemic it was considered among the most successful at curbing the virus’s spread until an outbreak in Melbourne, the country’s second-biggest city, that authorities struggled to contain.

The outbreak — which was traced back to two hotels being used to quarantine travellers returning from overseas — has ravaged aged-care homes in the city, causing dozens of deaths.

An overnight curfew, mandatory mask-wearing and the shutdown of non-essential businesses now appear to be bringing the virus under control, with the number of new daily cases falling below 300 in recent days. – AFP