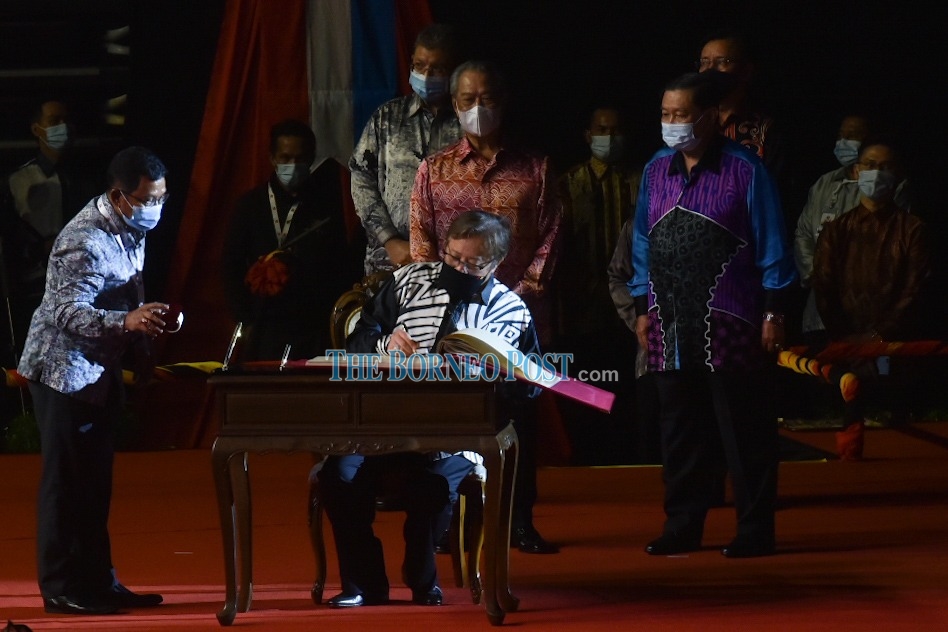 SIBU (Sept 16): Chief Minister Datuk Patinggi Abang Johari Tun Openg has made his strongest call yet on the federal government to restore the rights and powers of Sabah and Sarawak in line with the fundamentals of the country’s formation.

He believed that by returning to the fundamentals in the Federal Constitution, the Malaysia Agreement 1963 and the Inter-Governmental Committee Report, the spirit of nationhood in Malaysia would be strengthened and not weakened.

“Believe me, labeling especially Sarawak as being parochial or territorial will not help unite this country.

“Sarawak and Sabah certainly want their powers which have been eroded intentionally or otherwise, to be returned. That is all, nothing more and nothing less,” Johari said at the national level Malaysia Day celebration in Sibu tonight.

He said through the on-going negotiation in relation to implementation of MA63, the state is confident and looking forward to solutions which will see no losers.

More importantly, he said there would be no derogation of constitutional rights as well as special safeguards and status accorded to the States of Sabah and Sarawak as agreed by the nation’s founding fathers and embedded 57 years ago in the Federal Constitution.

He also pointed out that the features of the federalism which the Malaysian constitution embraced have been under intense scrutiny by the federal and state governments, with a more knowledgeable public, keeping a close eye on the implementation of these features, compared to 30 years ago.

He said the people now are fully aware of theirs and the state’s constitutional rights and special safeguards.

The public now demands that the federation respect and ensure non-transgression of these rights and safeguards.

“In any political system, where there are two or more legislative authorities to make laws, these law-making powers have to be clearly demarcated.

“Despite such demarcations, in Malaysia’s case via the Federal, State and Concurrent List, the potential disagreement is unavoidable as the exercise of these powers are influenced at times by different needs, aspirations and development or political agenda of the federal or respective state governments,” he said.

He also said in times of nation political instability, Sarawak as a political entity played an important role to ensure that the nation’s politics could remain stable.

It was this, Gabungan Parti Sarawak (GPS) decided to render their support towards the Prime Minister Tan Sri Muhyiddin Yassin because Sarawak did not want to see Malaysia to be affected by uncertainties.

He said that federal government’s ability to control the Covid-19 pandemic proved that Muhyiddin is capable to lead this country as hoped by the people.

He said Sarawak had achieved and developed since the formation of the country 57 years ago.

However, he said the state could not catch up with the development that Peninsular Malaysia enjoyed.

“What is important is Sarawak must continue to journey towards putting the state into more intensive development so that the state can become a developed one by 2030,” he said.